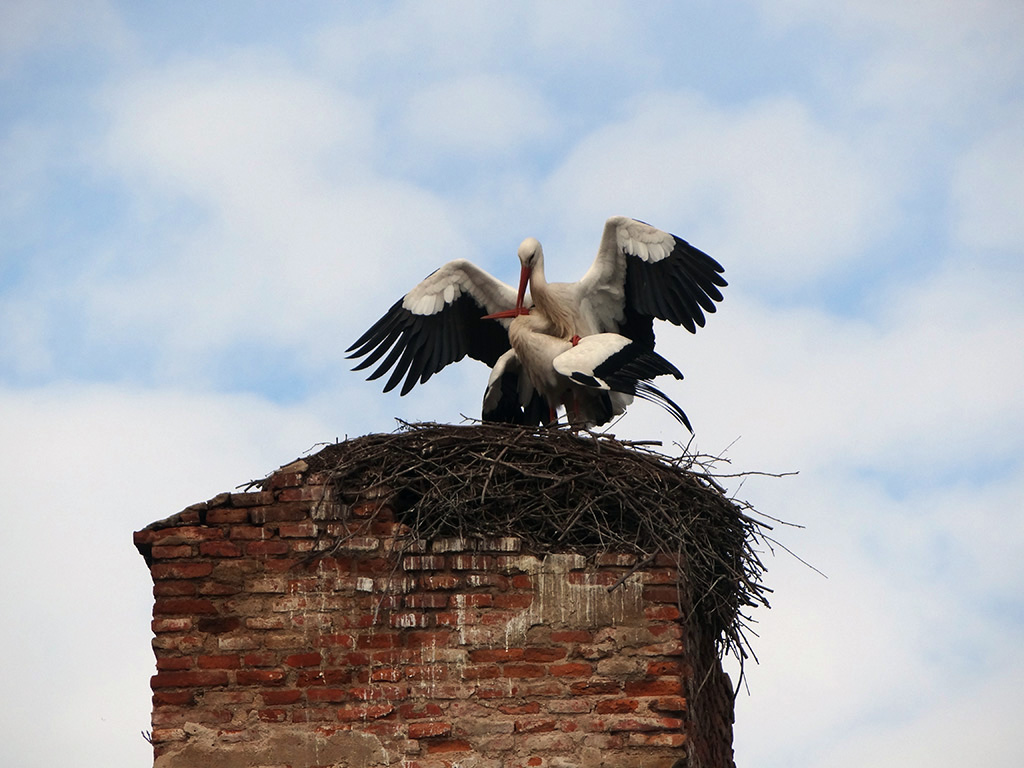 The storks’ settlements at the top of the main monuments of Alcalá de Henares make possible to create a touristic itinerary combining the historical heritage with the natural one. The Storks’ Route is thus presented to us as an excellent way of knowing Alcalá.

The route starts in Cuatro Caños (Plaza Mártires), next to the font. From there, the nests placed at the Faculty of Laws (1), and Santa María Church (2) can be seen. That is a total amount of eight nests and seven couples of lesser kestrels.

Following calle Libreros, passing by Santa María Church, and turning left by calle Beatas, you will reach your destination: Plaza de San Diego. In such position, there is a splendid view of the façade of the Cisnerian University, the architectural jewel of Alcalá. Looking away the street, you will find, again, the Church of Santa María. On the contrary, looking ahead, you will face the belfry of San Ildefonso Chapel (3), set up as icon of the city with its three nests.

According to the route, you will arrive to Plaza de Cervantes—center of the city—where it is possible to admire a great quantity of nests: San Ildefonso, Colegio de Santo Tomás (4), Oidor Chapel (5), Santa María Tower (6), City Hall (7), the Bar (8), and Colegio de Málaga’s ones (10) and, of course, the five nests of Agustinas (15).

From the back of the square, the tour will guide you by calle Santa Úrsula. There, the two artificial nests can be contemplated. You will also be able to admire the belfry of the Convent of Carmen Calzado (14)—just restored—and the two nests of the Convent of Agustinas (15) visible only from that side.

At the end of the street, on the left side, you find Convent of Caracciolos (13).

Turning left by Travesía de Avellaneda, you will be placed in front of Santa Clara (16). The biggest nest of Alcalá is found at the top of the building, the nest has been the one with more chicks over the last twenty years. On the right, the Magisterial Cathedral, the highest and most attractive tower for storks of all Alcalá: no less than ten nests.

A few meters ahead, looking back, the nests of Agustinas can be observed. Going ahead by the passers-by alley of Avellaneda, and turning left by calle Empecinado, you will come across the Magisterial tower. At that point, looking up, there is the nest of Sementales (17) and, looking back, those of San Felipe Neri.

Going on by calle Empecinado, the group is headed right with destination Huerto de los Leones Park, which offers nice views of the Magisterial Cathedral and Santa Lucia Church (20). Leaving the park by the opposite side and taking calle Tercia, you will reach another amazing view of the Magisterial. Just a few meters ahead, on the left, the nest of the Faculty of Economy (21), and also Santa Lucía’s are visible. Once you get to Plaza de los Santos Niños and enter calle San Juan by the left sidewalk, you will observe the three nests of San Felipe Neri (24). Then, cross the sidewalk and, right away, you will glimpse among the trees the fourteen nests on Archbishop Palace remains. If it is open, it is advisable to enter the parade ground: at the back of the grill, you will enjoy the view of all those nests.

Afterwards, go out and reach the last stop, in Plaza de Palacio, in front of Convent of Bernardas (25) (nine nests). On the right, you will stare at the Convent of Madre de Dios, with its six nests.