Alcalá is a city full of monuments and places for gastronomy and leisure, a real great touristic attractive. However, it also offers charms to visitors who look for a different kind of tourism, such as natural environments, hiking and outdoors activities, everything within the city nearbies.

A highly recommendable route leads you to the Ecce Homo hill, nestled within the Parque Natural de Los Cerros, it is the highest witness of Alcala’s surroundings and can be accessed by hiking—a route suitable for almost all publics. From the hill, you will have a wonderful panoramic view of the city and close towns such as Camarma, Daganzo, Meco or its neighbor Guadalajara, as well as the whole Henares valley. This is one of the best sights in the area as, from one point, you see even the highest hill of Guadalajara, Ocejón; and from the opposite, you reach to see Madrid skyline.

The Beginning of the Adventure

Those sights are a great prize given to you for reaching the flat top of the hill—with its characteristic trapezoidal shape. But in this route, you will find more places of high interest: Alcalá’s Arabian castle, caves such as Malvecino’s or Gigantones’—leyends included—, and also a great richness of birds and trees. In addition, this is a route to follow both walking and riding a bike—in most cases easy to perform—, and there is no need of having any special physical condition.

If you come from Madrid or Guadalajara by car—on motorway A-2—, you should look for the exit leading to M-300—Loeches and Arganda del Rey. Reaching kilometer 25th, you will find the parking of the entrance of Parque Natural de Los Cerros, in front of Cementerio Jardín. 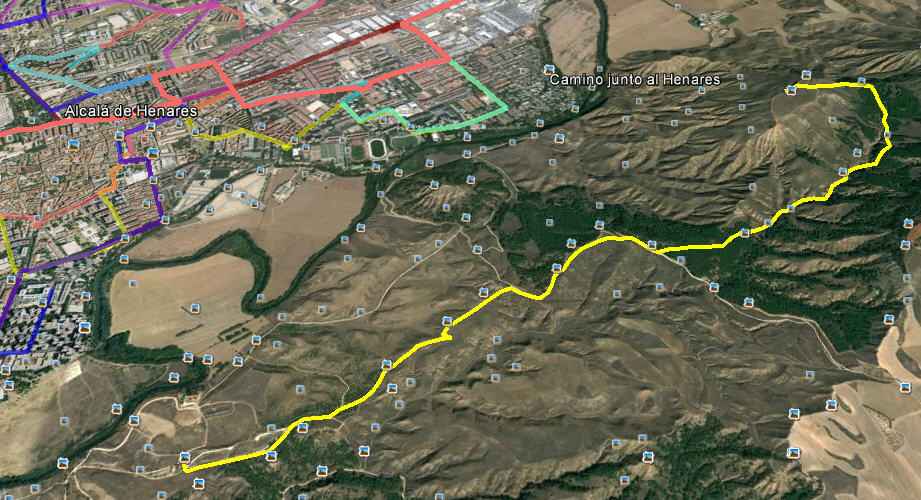 The Ecce Homo route,—as well as others passing by a natural park—, are clearly signposted with wooden sighs and colored sashes. In this case, you should always follow the yellow posts. Besides, there are detailed plans and leaflets explaining clearly how to reach to the top of Ecce Homo—information available in the City Council office of Tourism or in Aula de la Naturaleza itself, located near your starting point.

In order to be able to see the tour for the new route in Google Hearth, you should only download this file—assuming Google Earth has been previously installed in your computer.
Ruta Amarilla.zip
Compressed file in ZIP format  [2.1 KB]

Aula de Naturaleza was created in 2007 to spread the four routs you can possible enjoy within Parque Natural de Los Cerros: Puerta Verde, Retén, Tarais; and that of Ecce Homo and the Arabian Castle. Those routes may be combined in different sections so you are able to visit all park station.

Ecce Homo route is started by Camino de los Catalanes, from the very same entrance of the natural park. Starting from Aula de la Naturaleza, walk 1270 meters and then turn left until you find a Zara store. The way follows long sections of small terrain changes and light slopes through paths and forests, specifically Alvega’s path, from where you can see Henares River and the island with the same.

From this point, you will be going along the edge of Malvecino’s Hill, and you will be aware of vegetation changes. It goes from bushes—the main vegetation of Parque Natural Los Cerros, to the riverbank itself, where trees such as poplars, alder trees, black poplar, white willows and elms are rooted.

Besides the trees and sightseeing, you can enjoy the presence of numerous birds such as hoopoes, woodpeckers, cuts and blue geese. The landscape is turning more and more curious as you approach the Arabian castle, Alcalá la Vieja’s fortress, which even when it is not in the yellow route itself, it is close enough to see it in the distance and contemplate its outside for a few minutes.

SDenominated Qal’at Abd al-Salam, the Peace Castle, is the origin of the name of Alcalá. It was built up in times of the emir Muhammad I, in the middle of IX century. Part of the defensive strategy of Muslims, the place was chosen as settlement against the Christian Reigns of North—a frontier also encompassed with Guadalajara fortifications, Talamanca, Paracuellos and Madrid. 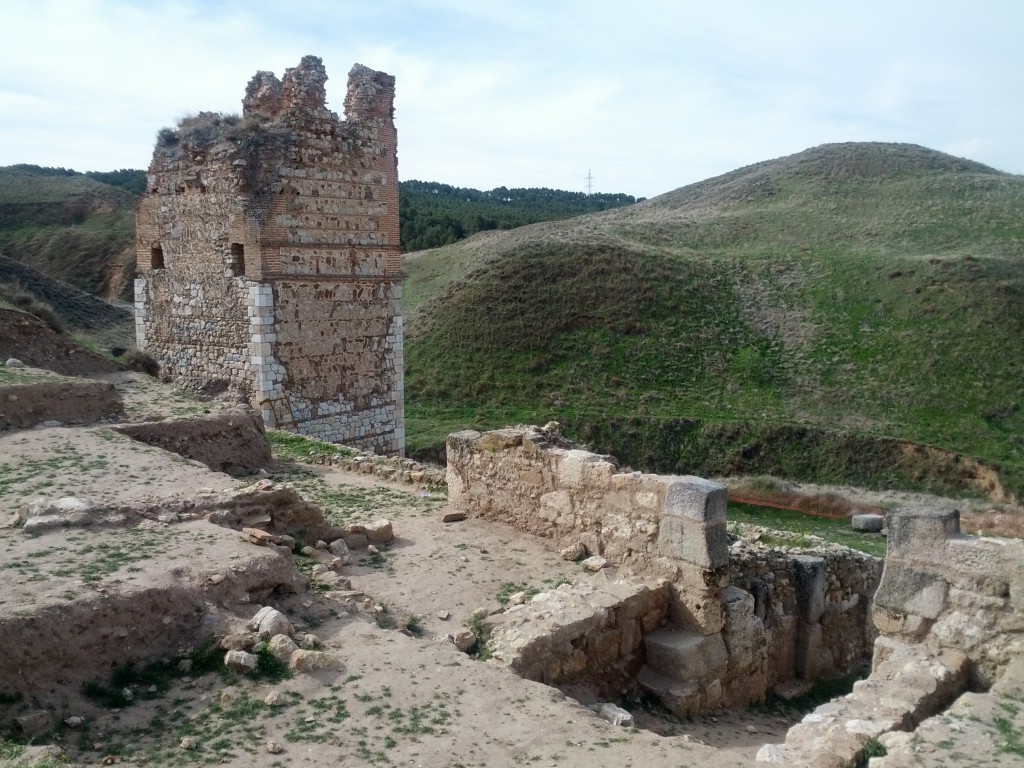 In this castle—with little remains rescued—, the remains of Albarrana’s tower—square-shaped—and fragments of a Caliphal Arch can be observed. Some walls foundations of the citadel and its outskirts are also still preserved.

Although Toledo was conquered in 1085 by Alphonso VI , Alcalá’s human strength still fighting until its fall in May 1118 before the troops of Toledo’s Archbishop Bernardo de Sedirac. The buildings nowadays collapsed were inhabited in the old times—until sixteenth thirty when they were definitely abandoned.

Ecce Homo hill is also named as Pico de la Vera Cruz, because the exact day of reconquer by Christian troops, a great cross burning in the top of the hill was seen, a signal which gave them the final and necessary strength to win the battle.

After exploring Alcalá la Vieja’s ruins, you should go back to the path and stick to it. As you are rising, you can admire the terrain cliffs. Besides, you could observe better the remaining of the Arabian Castle from upstairs.

And going up little by little the last part of the path made up by a steep slope, you will reach Ecce Homo’s top. As it is flat, you can enjoy a little walking that will allow you to see all panoramic sights at hand. Above any other, the most stunning sight is that of Henares River, in all its length, from Madrid to Guadalajara—it is 836 meters of height above sea level.

During the route you will pass through several caves, some of them very famous and holding their own legend. After passing the Arabian fortress, in the way down the top of the hill, a small cave is found—at the base of Malvecino’s hill. There was where a wooden fortress was built and used to besiege and conquer the Muslim Castle.

Located between the Ecce Homo top and the Arabian castle, Gigantones cave—with a huge size—counts with a legend where its name comes clear: it was inhabited by the giants identified as the legendary Ojancos, mythology Spanish creatures—giant ogres with just one eye, long bears and two lines of teeth in their mouths. However, the cave has also a more evocative and mundane name, Mushrooms’ Cave, as during some time in the recent time, the cave was used to raise mushroomss. 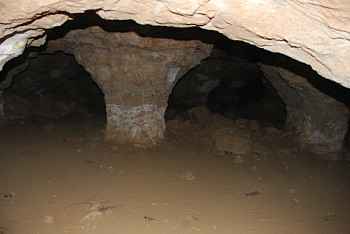 These caves and some others from the surroundings were occupied during the Civil War of 1936 by Alcalá’s inhabitants who were running out from the bombs exploding above the city. Some historians have written that, in that cave, Gigantones’, up to 600 families took shelter. In its interior, masonry structures supporting such human occupation are found.

After the caves—with very sorrow entrances—the coming back to the Parque Natural de Los Cerros can be made taking La Barca and Catalanes paths. In all, the route that takes around five or six hours to be fulfilled, with a total length of approximately 11 kilometers.

The Spa of the Parador de Alcalá de Henares