The journey between Alcalá de Henares and almost every city of Spain can be covered by train. We suggest you to use such a comfortable mean of transport for tourist visiting.

Alcalá de Henares has very good connections with the rest of Spain. If you plan to visit it, the city is accessible by road, by bus or by Community of Madrid train network, Cercanías. In any case, the city center—where most of the places worth to visit are held—is only a few minutes walking from the rail station.

If you decide to travel by Cercanías, your first impression of Alcalá de Henares will be very different. You will be delighted by the ambience of the city since the first moment, by its quiet surrounding and the monuments and lovely corners you will discover at the same time.

Alcalá de Henares’ train station links the city with Madrid—trains leave every ten minutes—and with Guadalajara—every half an hour. In order to arrive to Alcalá, you should go on a train from Cercanías network—with a capital C with a long tip painted in red as a logo, one of the most notable works by the painter and designer Alberto Corazón.

Fall and summer weekends are the best moments to go on the Tren Turístico de Cervantes [Tourist Train of Cervantes], departing every Saturday from Atocha’s station, in Madrid. As soon as you get into the train, you will travel back in time to Cervantes’ living period, being even able to “greet” Don Quixote personally. 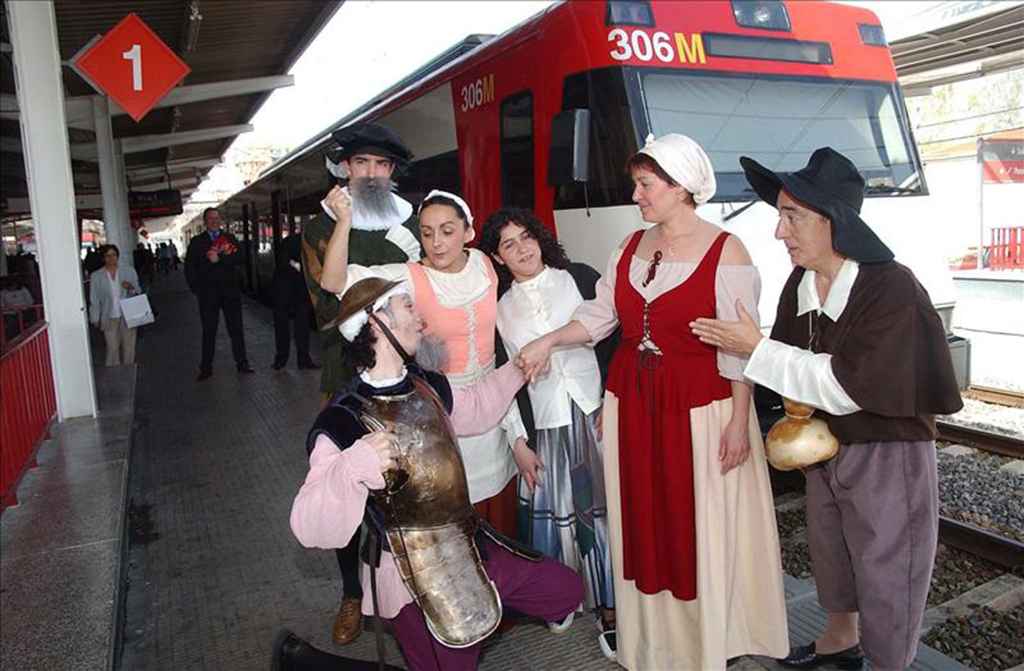 For more information about the Touristic Train of Cervantes, click here.

Once standing at Alcalá de Henares’ station, huge photographs of the most representative places of the city will welcome you. Outside on the street, you will run into a tourist information-stall of the City Hall of Alcalá and into a taxi rank. On the left, the staircase leading to the footbridge crossing the train line raise to your view, while, on the right, your attention will be caught by a sculpture representing some men, women and children standing. It is the monument honoring the victims of the terrorists attack perpetrated on March 11th, 2004 (11-M), in which several of Alcalá’s neighbors were hurt.

Passing by this monuments means you have accessed Paseo de la Estación, a straight avenue that leads directly to the historical city center. Before that, you will go through the crossing between paseo de la Estación and calle Ferraz (on the left), where decades ago an open-air cinema was placed. The crossing with calle Cánovas del Castillo (on the right), takes you to one of the classical parks in Alcalá, O’Donnell’s, and the old walled enclosure of Alcalá.

Carrying on and leaving the crossing behind, the magnificent Laredo’s Palace lays on your left. With Neo-Mudéjar style, the building built at the end of nineteenth century currently holds the Cisnerian Museum—dedicated to Cardinal Cisneros, founder of the  University of Alcalá.

The building stands out due to its outside beauty, but it is even more surprising in its interior, where the richness of its halls, full of precious details, is decorated with a unique style only found in palaces and castles lost centuries ago. 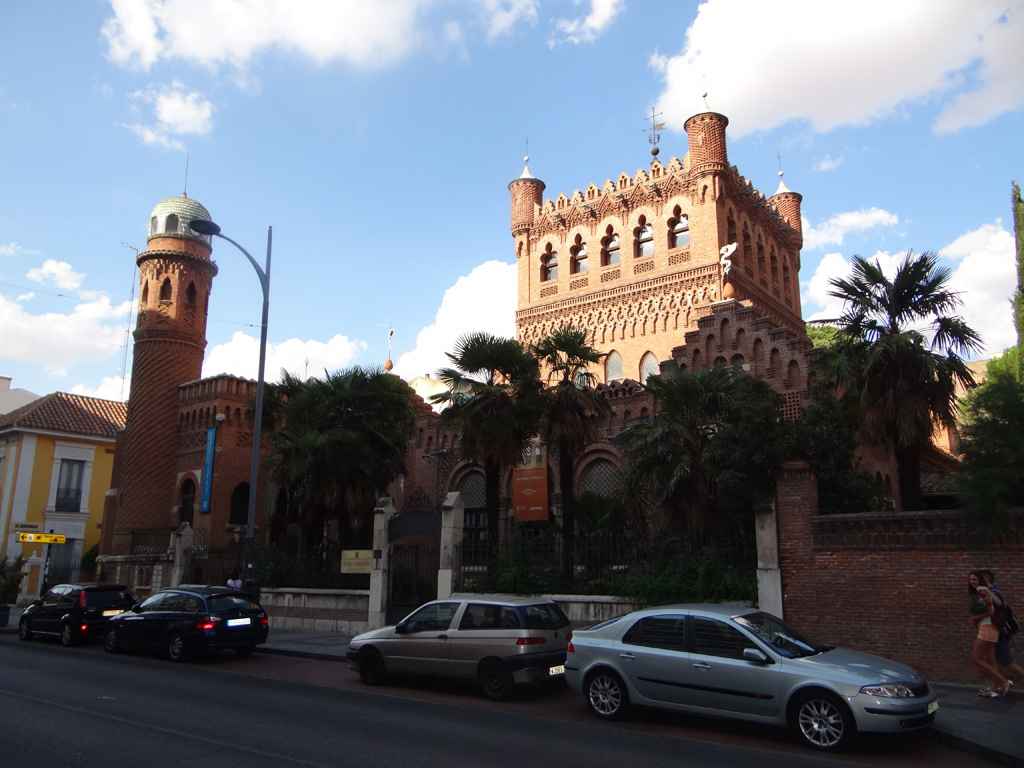 Continuing with your walking, you will end up in Vía Complutense, the old national road crossing Alcalá and linking with Madrid and Barcelona in the old days. This road has been transferred today to a beltway in the outskirts of the city center.

At the end of Paseo de la Estación, there is a roundabout in whose center a huge statue of Don Quixote is found. The statue, of about fifteen meters of height, is placed just in front of a curious gas station. Its huge cover has the feature of a beaver, the hat of a picador—one of the participants in the Spanish tradition of bullfighting. The thing is that, the person who opened such gas station was a famous bullfighter who wanted to put an unmistakable bullfighting touch. 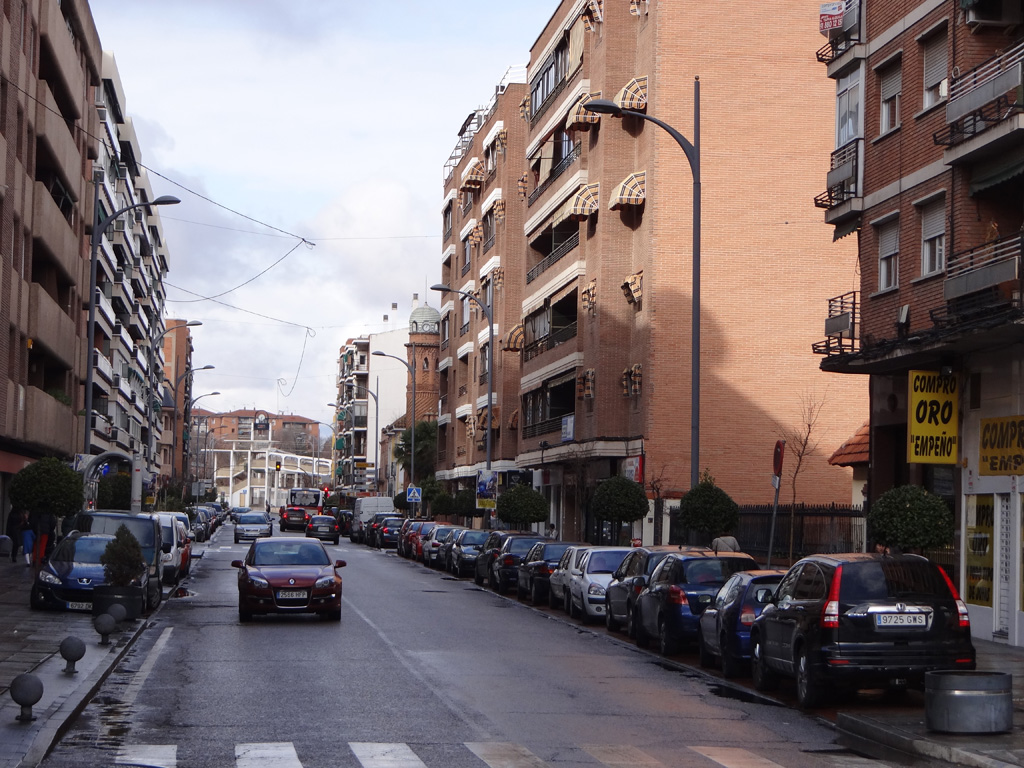 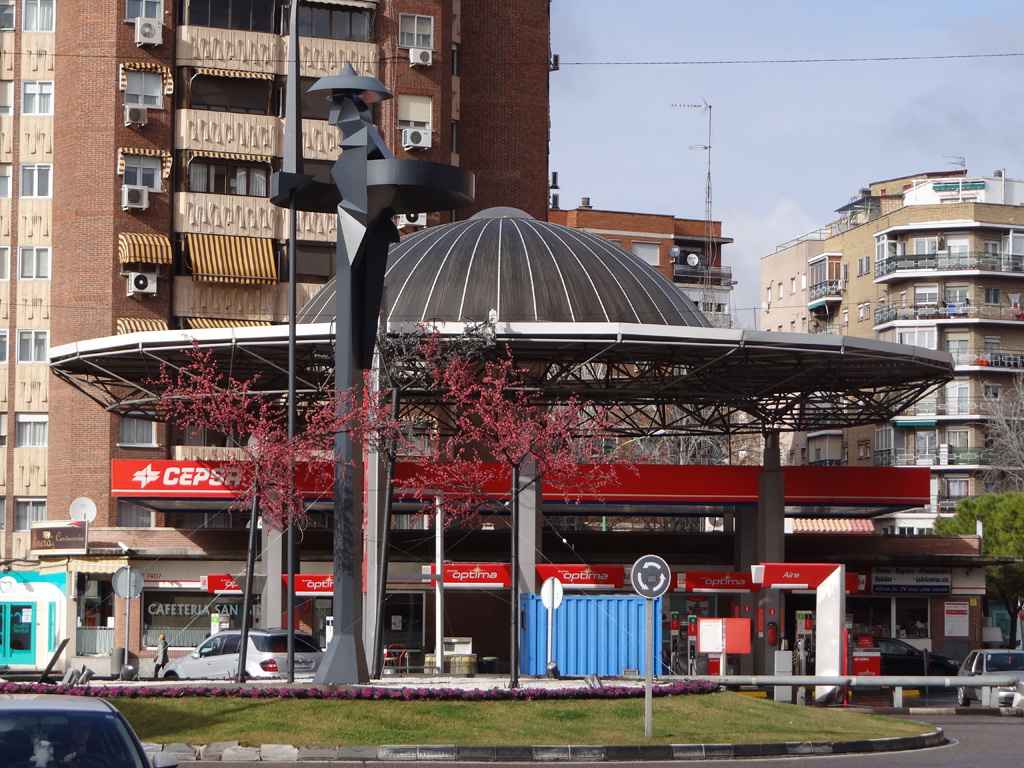 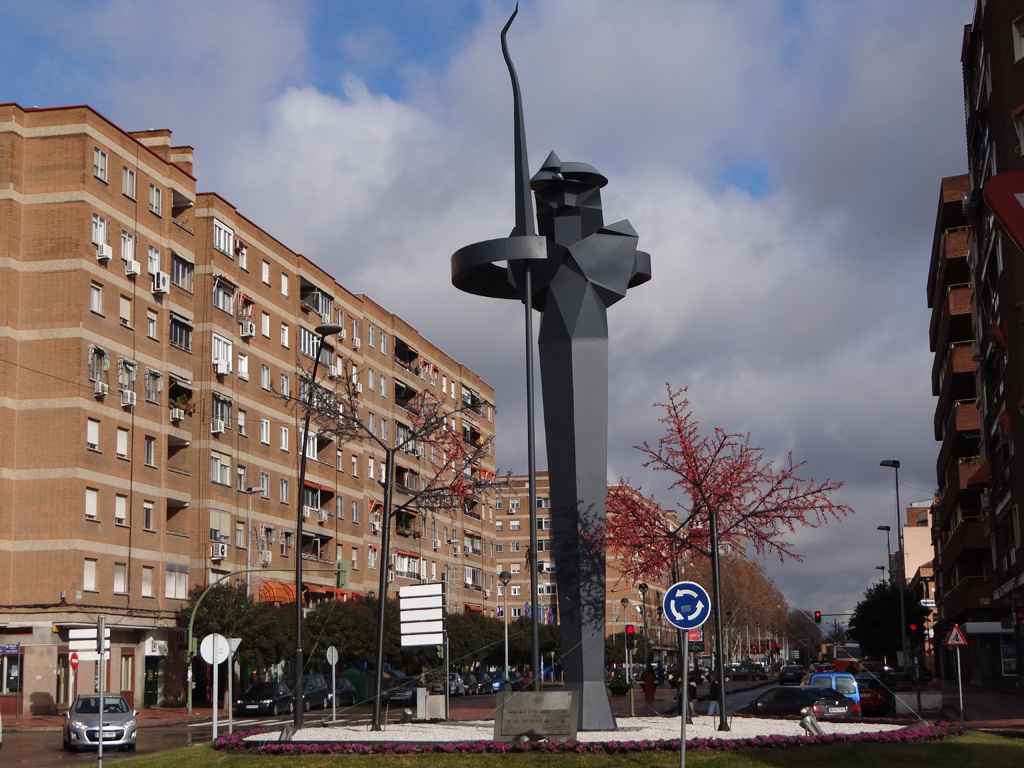 The boulevard dividing Vía Complutense shows several sculptures upon pedestals on the left. Made of metal, that sculptures that are part of the Open-Air Museum of Sculptures, reproduce several works of many other sculptors. Covering most part of the already mentioned Vía Complutense, the museum was created by the artist José Noja during the nineties following the orders of Alcalá’s City Hall.

Going on straight on your way and, crossing vía Complutense, you will see the red-brick wall of the current Law Faculty. The old colegio Máximo de Jesuitas (Jesuit Maximum College) has a surprising wall with a chess-like design in which, every few meters, small white plates are set in the wall. Those names honor the most notable jurists of Spain history, and particularly, of Alcalá’s and its university’s history.

Going on by the sidewalk, it is placed the corner of the faculty building. Now, you are in plaza de los Cuatro Caños, a popular named designated during the sixties after the fountain of Cuatro Caños—today used as a roundabout to organize traffic. In the mediaeval times, the square was occupied by puerta de Guadalajara—starting point for travelers headed to the East, to the city of Guadalajara. Traditionally, the first time Toledo’s Archbishop and lords of Alcalá arrived to the city, they entered by such door. Since the sixteenth century, the door was renamed as puerta de los Mártires [Martyrs’ Door], as it still, since the remains of the relics of the Alcalá’ landlords, Saints Children, Justo and Pastor, rely in there. 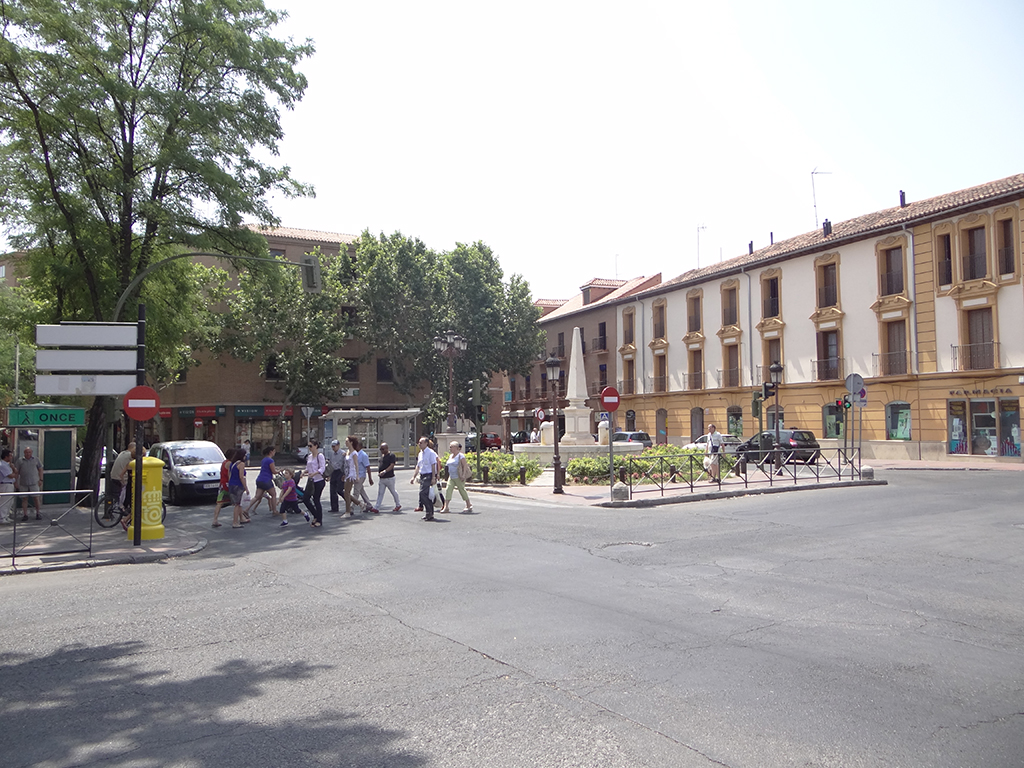 In front of the Faculty of Laws—at colegio Máximo—next to the chemistry of the corner, there is a building named, as its sign specify, colegio de los Verdes or Santa Catalina Mártir—the nickname of los Verdes is due to the color of the sash or strip the students wore.

Turn right and enter calle Libreros. The presence of a great quantity of printer’s in its surroundings since the nineteenth century is the reason of its name. In one of that print’s, the first edition of “La Galatea”, by Cervantes, in 1585, was printed. Other important works such as the Complutensian Polygloth Bible—one of the biggest publishing efforts of that time, by the printer Brócar—or Nebrija’s grammar—lecturer of the University of Alcalá called by Cardinal Cisneros—were printed in workshops of this street and adjoining ones. For that reason, when calle Libreros joins plaza de Cervantes, another street full of charm, L-shaped, appears on the right with the name of the writer.

For more information about the Complutensian Polygloth Bible, click  here. 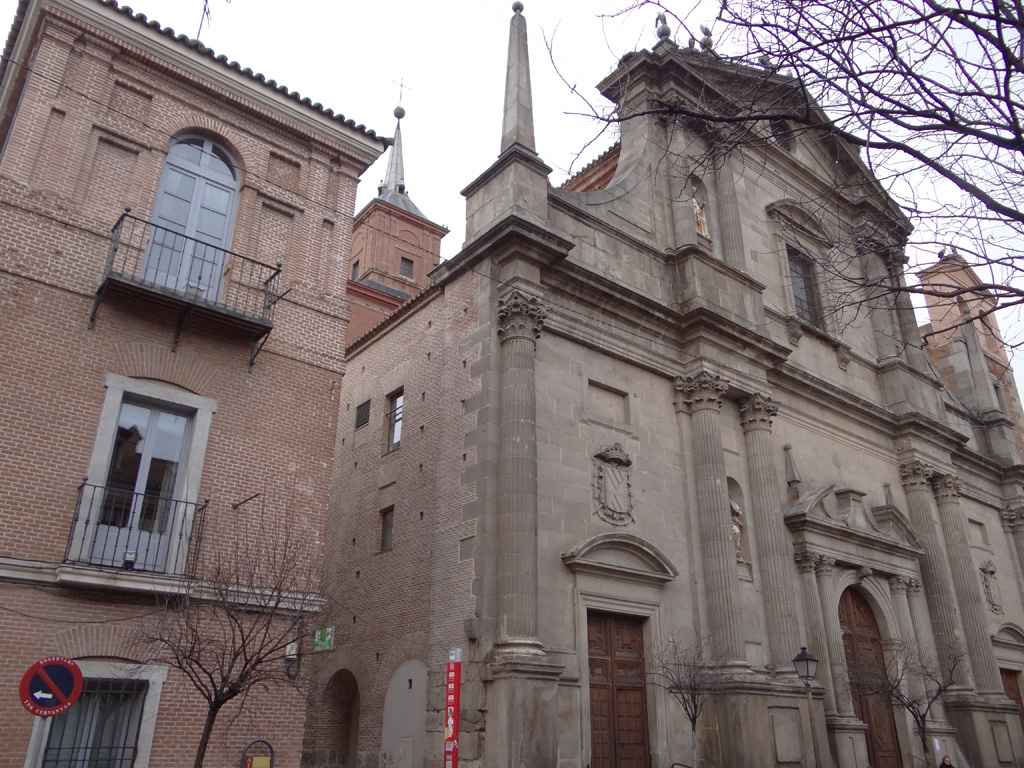 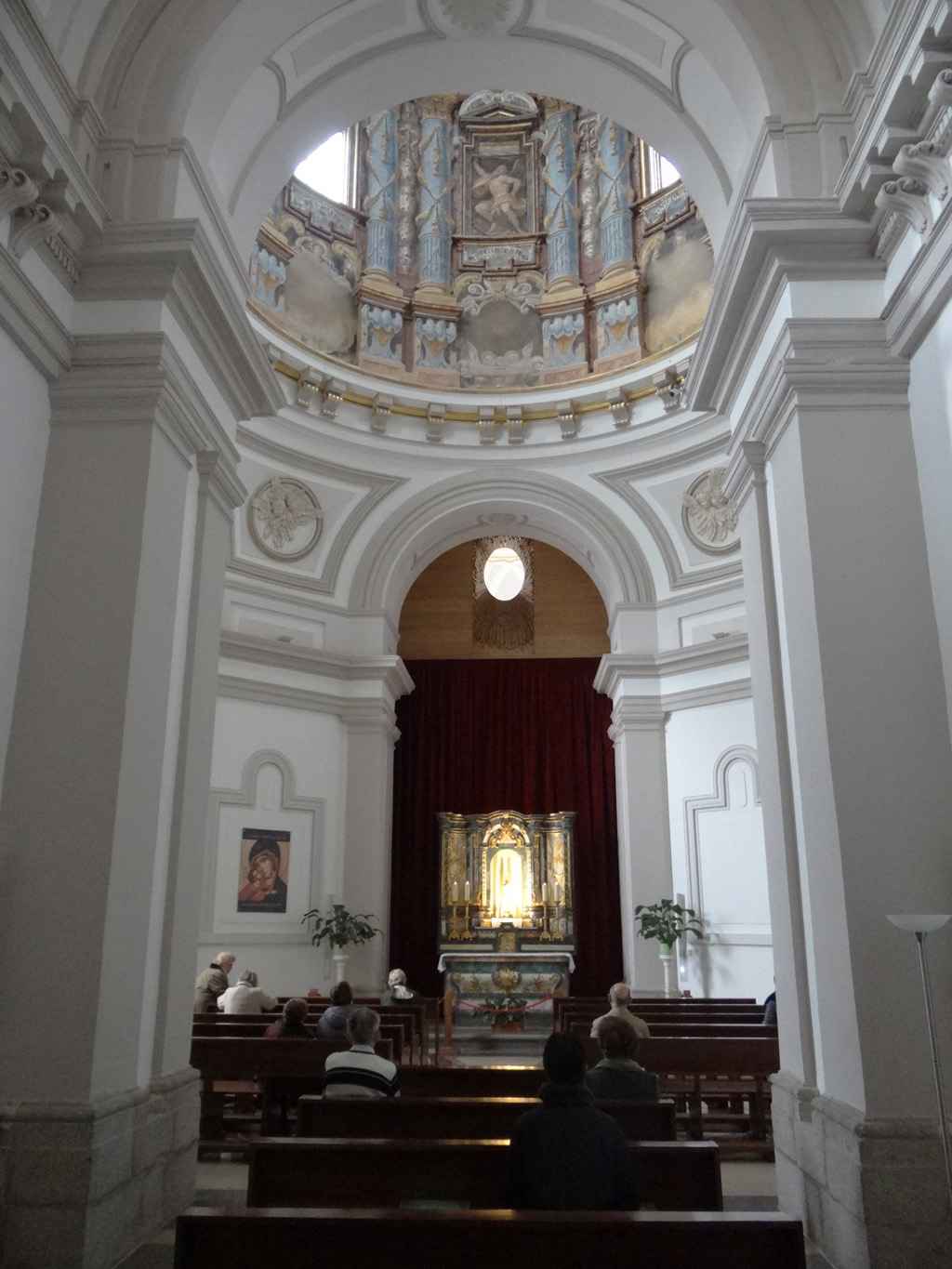 Just after the church, there is Colegio de León and Colegio del Rey. Both of them were considered as headquarters of Instituto Cervantes since 1991 until its move to its current emplacement in Madrid—in the so-called “Edificio de las Cariátides” [Building of Caryatids], calle Alcalá. Nowadays, this is the official co-headquarter and an important center of exhibitions and cultural activities of the Institute in Alcalá. In these moments, the exposition showed is named Places of Inspiration. 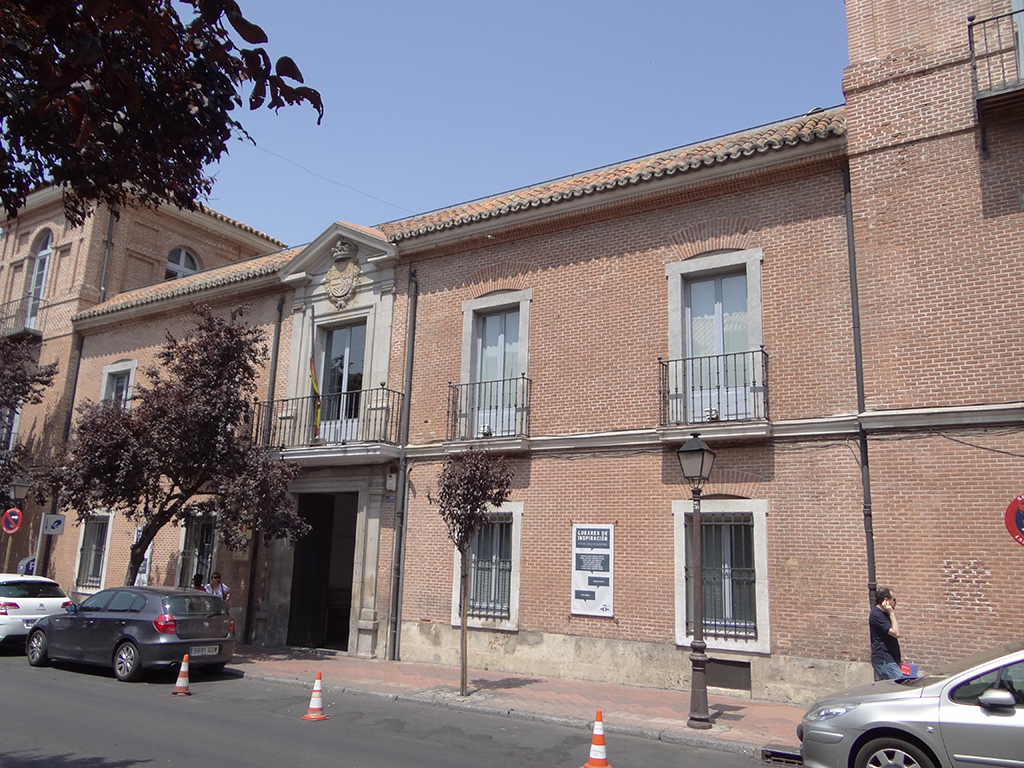 For more information about the Places of Inspiration exhibition, click  here.

The Alley of the Wood-Fired Oven

Continue by calle Libreros and, besides magnificent architectonical monuments, you will find countless shops and bars. Leaving behind the façade of the Church of Santa María la Mayor, you will see on your right the appearing of two alleys, reopened not a long time ago, narrow and covered with mediaeval flavor.  Through them, you will access and leave plaza de San Lucas or plaza del Patrimonio, where there is an underground parking and a small garden in its West, with some architectonical rests. We are referring the alleys of Santas Formas [Saints Shapes] and Horno Quemado [Wood-Fired Oven], a corner full of charm.

Coming back to calle Libreros and crossing the sidewalk, you will arrive to calle Beatas, were you will quickly come across the convent of Clarisas de San Diego. Such convent is very famous inside and outside Alcalá because of their famous Alcalá’s almonds or sugared almonds that will be sold to you through a swivel window—as the enclosed nuns should hide their face from the public view. 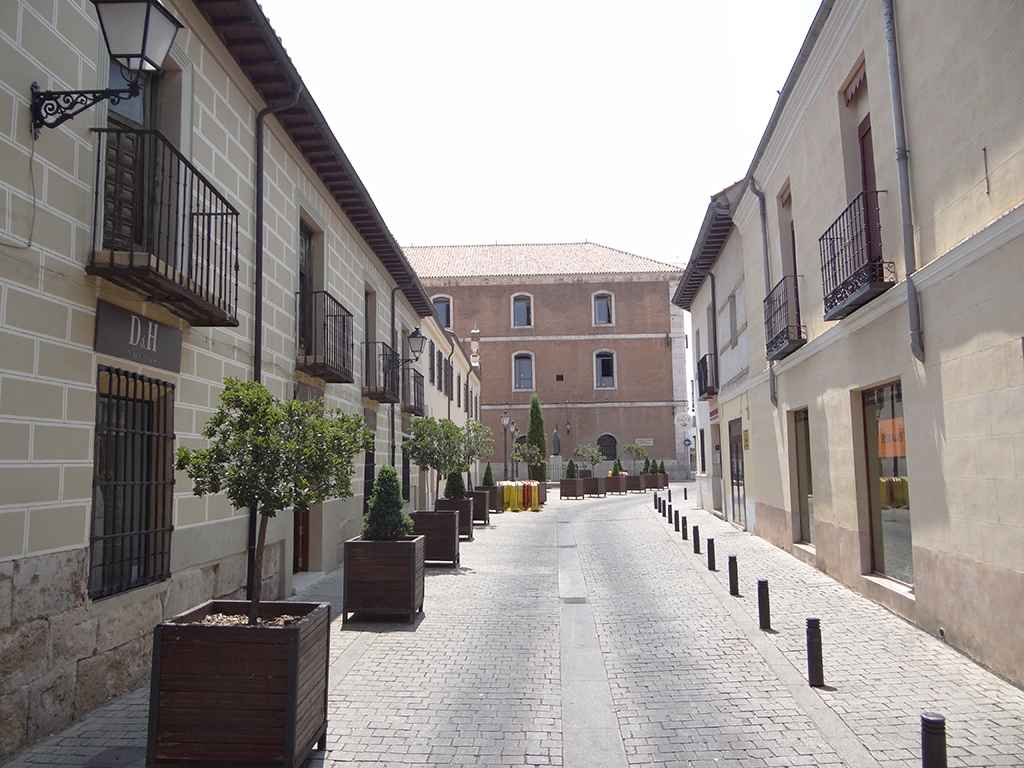 For more information about the convent of Clarisas de San Diego, click  here.

Going out of the convent you will have arrived to plaza de San Diego and to the matchless view of the façade of the University of Alcalá founded by Cardinal Cisneros in 1499. But there is also an alternative way that will reward you with a different but not less striking view. Going a little ahead by calle Libreros and entering calle Bedel—a short and full of inns street—you will observe at the end the university framed by the street. Seeing this image, you would feel as if you had found a hidden treasure that suddenly appears in front of you above all surrounding buildings.

Finally, beside the façade of the university, the authentic golden almond of the historical and artistic universe of Alcalá is located. The jewel hides itself many other jewels in its interior: yards, gardens, halls and the main auditorium—the Paraninfo.

For more information about the University of Alcalá, click  here.

Just on its right, you will discover San Ildefonso Chapel, sober in the outside but extremely beauty in its interior.

And if you continue walking, you will arrive directly to the famous Plaza de Cervantes, the meeting point par excellence in Alcalá de Henares. 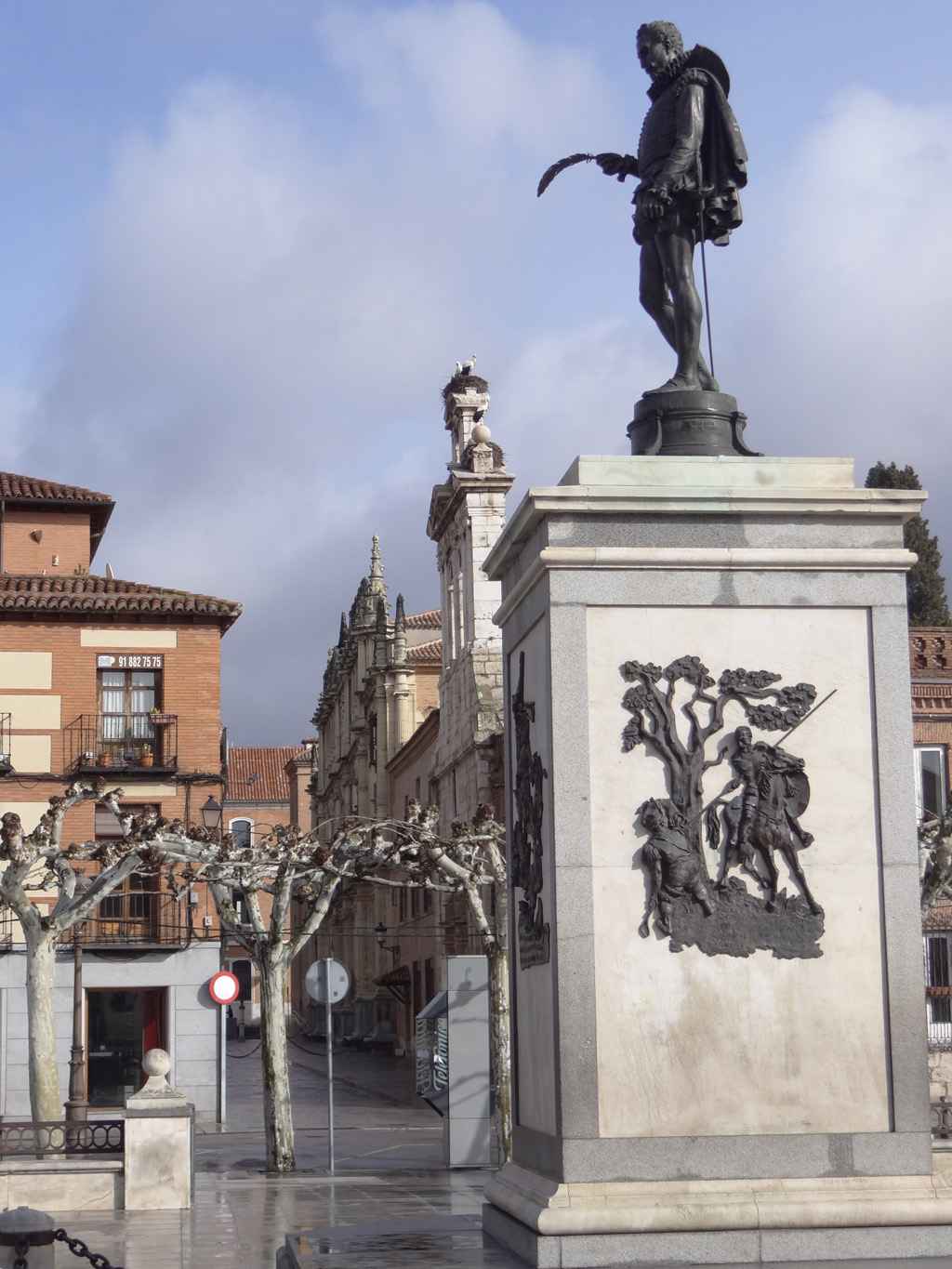 Our visit ends here; we hope you enjoyed the journey. If you are willing to continue discovering Alcalá de Henares, we encourage you to go on listening the next audioguide, Alcalá in just a morning, which starts in Plaza de Cervantes and covers Calle Mayor, Cervantes Birthplace Museum and many other treasures of our city. See you soon.

For more information about the audio guide Alcalá in just a morning, click  here.