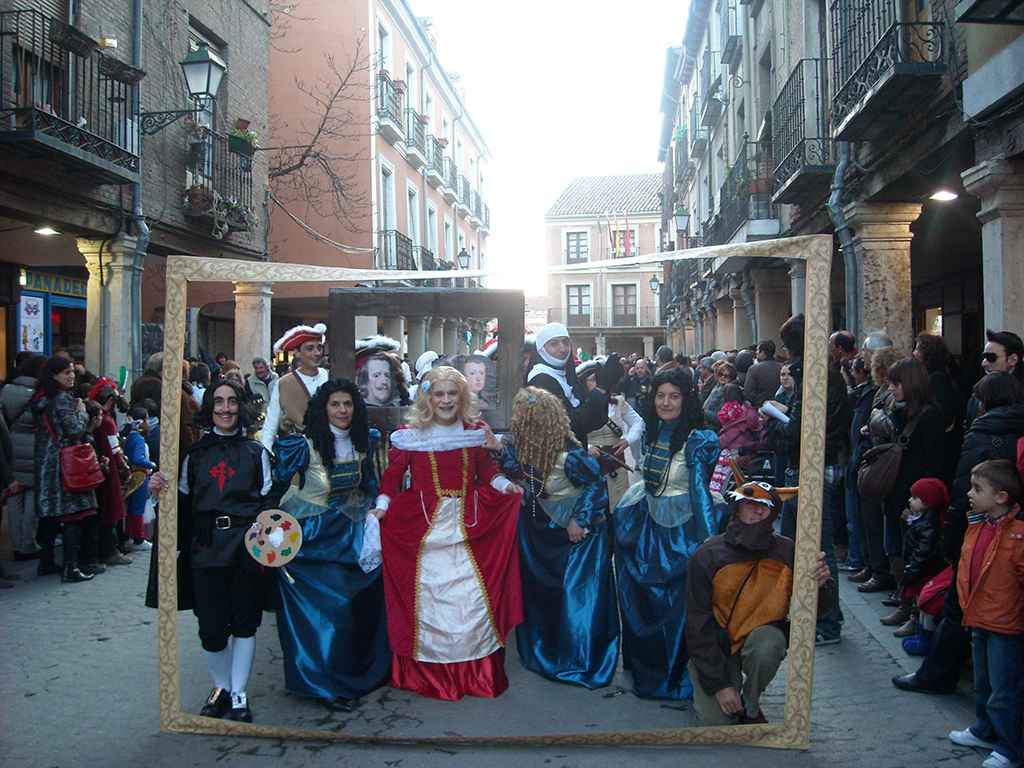 Discover Alcalá de Henares Carnival, its origins, its customs and how it is traditionally celebrated each February.

Carnival is a festivity preceding the celebration of Lent—Catholic festivity—at the beginning of February. It is characterized by all kind of costumes, criticism at the established order and tons of fun for a few days.

In Alcalá, Carnival has been celebrated since centuries ago, although as in most areas of Spain, it was prohibited during dictatorship of Francisco Franco. In the last decades, it has been little by little recovered thanks to the large boost of the City Hall and the enthusiastic involvement of neighbors.

Carnival has been originally considered as a festivity from countries with rooted Catholic culture, as it happens in the worldwide famous carnivals of Venice and Rio de Janeiro ones, about which you have surely heard. Apart from Venice carnival, those of Maguncia (Germany) and Niza (France) are famous in all Europe. Within United States, the festivity is mainly celebrated in the South, New Orleans and Alabama, in the so-called Mardi Gras.

In Spain, Cádiz Carnival is widely-known. Different from all other carnivals, Cádiz one is characterized by its famous chirigotas or comparsas: groups of friends who sing satirical songs in time to catchy popular tunes. The carnival of Santa Cruz de Tenerife is also notable. In there, it is held a female contest of lavish costumes, just as it happens in Rio de Janeiro.

In Alcalá, carnivals have been celebrated during centuries, as in the rest of the world. The origin of its name dates back to the lifting of the traditional Catholic Church prohibition by which eating meet was banned on Fridays and during Lent—the forty days preceding Good Friday, a period of reflection and fasting, denying the body any kind of physical pleasure. That is why during Carnival, people enjoy with no qualms to satiate themselves before going through the fasting, or at least that is the tradition. This is the origin of the Italian word carne-vale, meaning: “eating meat is allowed”.

The Burial of the Sardine

Alcalá de Henares carnival is a synonym for costumes. Alcalá’s inhabitants are devoted for days to their preparation. This activity is suitable for all, children and adults, as in almost all schools, plaza de Cervantes and the historical city center, great processions take place—as well as shows and contests with hundreds of participants dressed up with colorful and original masks and costumes, year by year increasing in number.

Besides contests in which best costumes are prized with gifts and money, the City Hall schedule a series of events all through the weekend previous to Ash Wednesday—the day closing carnival every year. Activities include passacaglia and street performances, support to comparsas—groups dressed up with the same costume who organize their own parties and street appearances—,music or comical spectacles, and sometimes a festivity closure based on fireworks, as it happened in 2013.

The beginning of the carnival normally implies an opening speech encouraging Alcalá’s inhabitants to enjoy carnival despite of the cold weather of that period of the year; generally some writer, singer or any other famous character, weather in a local or national range.

Carnival finishes its enjoyment days with a symbolic and comical goodbye, the Burial of the Sardine [El entierro de la sardina]. The event consists on carrying a casket, made of cardboard or painted wood, followed by an entourage of mourners and crying followers, in a farce in which carnival is feelingly resigned until next year.

At the final point, the sardine and its coffin are burned and buried, and the fake mourning stops. Today, it is experienced as a funny and jolly situation, but traditionally, the mourning had a real cause, the beginning of Lent.

In Alcalá, the Burial of the Sardine is celebrated in the afternoon of Ash Wednesday, with a mass funeral procession in which street theater groups participate, going out from plaza de Cervantes through calle Mayor, passing by plaza de los Santos Niños, turning right to calle de San Juan, then left to calle del Cardenal Sandoval y Rojas, and ending into the vegetable garden of the Archbishop’s Palace, where the final act of Carnival festivities take place.

The Dance of the Blouse

In Alcalá, Carnival traditions that were present at least until Spanish Civil War still having some trace today. Disappeared after a 40-years period of prohibition, some Alcalá’s groups such as the Children and Friends of Alcalá Association keep their memory alive.

During previous periods, the beginning of carnival was marked by straw dolls (human figures made of straw and rag) hanged in plaza de Santa Ana, at the end of calle Victoria, to which kids thrown stones as a game. Buddy’s Thursday follows in a journey in which people walk to Fuente del Cura [Priest’s Fountain], in paseo de la Dehesa—current avenida de los Reyes Católicos—, where a snack is taken and some games are played by young people. At night, a dance was celebrated.

As the time went by, the dance disappeared and was replaced by the Dance of the Blouse, where only men wearing blouses or white shirts, and women wearing black dresses and a red scarf could dance, creating a great visual effect.

The Children and Friends of Alcalá Association have celebrated from time to time the ritual of the arrangement of straw dolls and the Dance of the Blouse, recovering some of the traditions of old Alcalá’s carnival.

Carnival Procession of 2012 in 3D
(to see it properly, you need to use Anaglyph 3D glasses with red/blue lens)