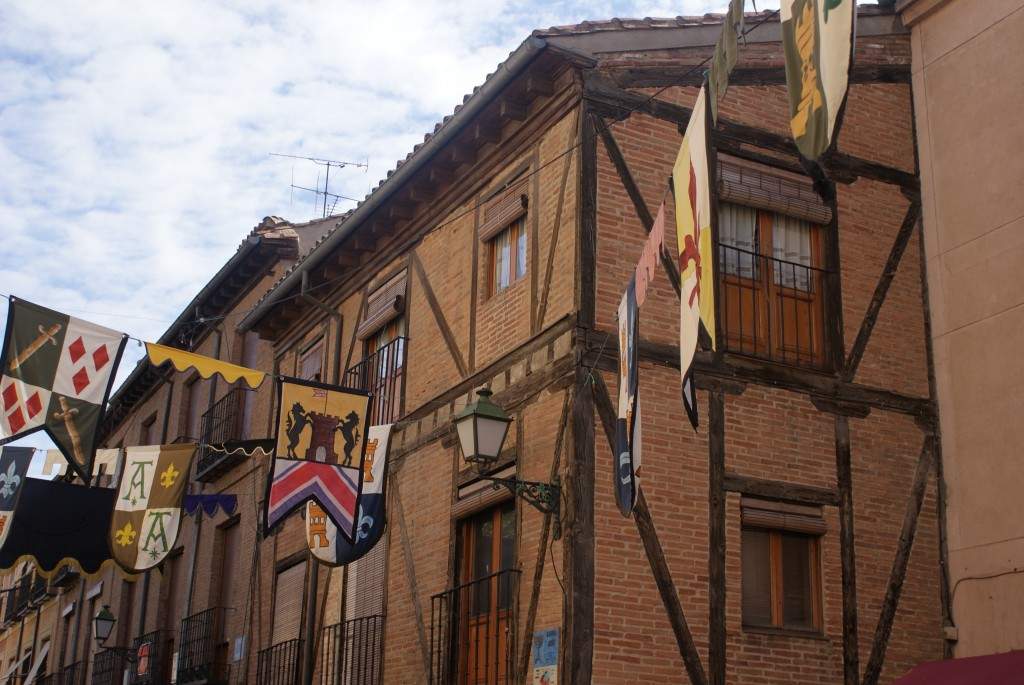 The Mediaeval Market of Alcalá de Henares (or Don Quixote’s Market ) turns the complete historical city center into an alive scenery that transfers us back to the seventeenth century. In there you can admire street stalls, vendors, artisans, walk-on extras, singers and even neighbors dress up in that period way. It is the biggest market of Spain and Europe, with almost 300,000 visitors.

The Mediaeval Market of Alcalá de Henares (or Don Quixote’s Market) is celebrated since 2000 within the framework of Cervantes’ Week —in which activities from diverse nature are developed— with a view to commemorate Miguel de Cervantes’s baptism (October 9th, 1547).

This kind of historical markets became popular all over Spain and give the name of Mediaeval Market not only to Alcalá’s one, but also to other relevant fairs such as Puebla de Sanabria and San Froilán, in León. Notwithstanding, in the case of Alcalá, clothing and decoration always date back from sixteenth and seventeenth centuries, period in which Miguel de Cervantes was born and lived.

Curiosity
Alcalá’s Mediaeval Market is the biggest of both Spain and Europe, considering that the complete historical city center is occupied by the fair—from plaza de San Diego, where the university is placed, to plaza de Palacio, where the Archbishop’s Palace is located, next to plaza de los Santos Niños. Over the last years, the market welcomed more than three hundred thousand visitors.

Alcalá’s Mediaeval Market is the biggest of both Spain and Europe, considering that the complete historical city center is occupied by the fair—from plaza de San Diego, where the university is placed, to plaza de Palacio, where the Archbishop’s Palace is located, next to plaza de los Santos Niños. Over the last years, the market welcomed more than three hundred thousand visitors.

Homemade food such as meat pies, honey or liquors can be found, as well as handicraft trappings, dried flowers, rag dolls, esoteric objects and a great variety of craft objects, in many occasion in sight of visitors.
Even information centers get involved into the mediaeval environment, as all staff involved in the event organization get dressed with period clothing.

Every stall and its vendors, any trader, artisan or assistant are dressed up with clothing from Cervantes period. The stalls are exhaustively decorated in the period way, and the City Council demands a strict attention to details so as to create such environment: the prohibition of carrying watches or jewelry, or using the mobile phone in view of visitors. Doing this, the famous story in which a scene of spaghetti westernwhere fierce Apaches carried watches shining in their wrists ruined the stage performance could be avoided.

That is why you will not find in any stall within Alcalá’s Mediaeval Market anyone who gives you whatever you buy inside a plastic bag; neither will you see anything in the market made with that material. Likewise, the stalls are covered and decorated with fabrics, furs and even branches and vegetation, achieving a very well-made mediaeval environment. Every detail is carefully selected, as it can be observed by the use of Roman scales—made of iron and weights—instead of the current electronic ones.

There are streets after streets, and squares and corners, where more than three hundred stalls are set up. You will find traditional food products, such as honey, pies, bread newly-made in a portable oven—public can see how the baker prepares the dough—sweets and lady fingers, liquors, typical cold cuts, dried flowers, perfumes, medicinal plants, esoteric objects…

Wood, mud and stone pieces are made at Alcalá’s Mediaeval Market, as well as hampers and silver jewels, traditional trader’s objects. Many of those artisans do their jobs in front of passers-by; likely, in any street or any corner, visitors meet smalls street exhibitions, either short theatre performances, snake charmers or falconers with his gloves—covering his fist and wrist—holding falcons or owls—though birds are domesticated up to the point that people can take photographs with them, even children, who have a really good time with all these activities.

Into the Alcalá’s Mediaeval Market, you may find at any time along the street—many of them covered with straw with the period style—groups of musician with old instruments playing cheerful music and followed by groups of people enliven the march—even the very same Don Quixote and Sancho Panza, riding a horse or a donkey, who you may greet in the middle of calle Mayor, just like you will see children riding donkeys, guided by a groom, by plaza de Cervantes or its outskirts.

A replica of the Lewis chessmen in miniature is an example of the objects that only can be found in that market—unless you look effortlessly for it in specialist shop. It is the first chess that includes the figure of the queen as such, being a feminine representation dating back from twelfth century.

The Cervantes’ Market is part of the Cervantes’ Week, full of acts for commemorating Cervantes’ baptism in Alcalá such as a public reading of Don Quixote and a municipal parade from the City Council to the Oidor Chapel with the writer’s baptismal certificate.

Among many others activities, the Gastronomical Days, where more than a dozen restaurants offer Cervantes’ menus—inspired in the Golden Age period with a contemporary touch—; and the Old and Secondhand Book Fair, set up at plaza de los Santos Niños.