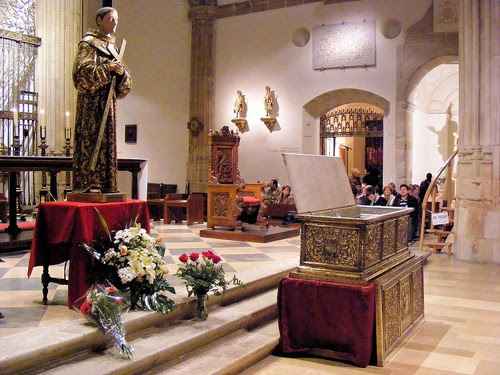 The incorrupt (mummified) remains of San Diego―after who the city of California state, in United States, was as well named―have been preserved in an urn for more than 400 years inside the Magisterial Cathedral, where every 13th of November they are showed to devoted population.

The Urn of the «Incorrupt» Remains

This year, the Jubilee year for San Diego Franciscan monk is celebrated by the Catholic Church, commemorating more than 550 after his dead. His mummified or «incorrupt» remains are kept into a golden chest inside the Magisterial Cathedral, and showed every 13th of November―date he predicted himself as the one for his dead, and turning out to be true. As commemoration, there is an all-day procession for faithful people and visitors, besides a mass or homily offered by Alcalá’s bishop.

During his life, he was famous due to the miraculous healings he performed among the poor people he attended, and after he died, he has equally famous among powerful people, as the King Henry IV, whose arm was healed thanks to the saint power.

One of his most devoted person was Philip II, who claimed his remains to ask for the saint support in the healing of his son, prince Charles. The child had suffered an important falling down the Archbishop’s Palace stairs, in 1562, and he had suffered a great bump on his head. When the Saint remains rested next to the prince sickbed, he healed.

The Saint of Roses

This was one of the six miracles that motivated his canonization in 1588 by Pope Sixtus VI. He was the only Spanish saint in all the century. However, the most known miracle is that of the roses, and thus, he has been commonly represented in paintings and images holding a bouquet with his hands; as it happens in Alcalá.

This miracle is summarized as follows: Friar Diego of Alcalá used to make disappear food from Franciscan convents where he was, and in one occasion he took some breads―others say it was a leg of lamb―to give them to poor people, but he was caught. However, he said that he carried flowers under his robe, and when he revealed it, it was as so, a rose bouquet.

San Diego was born on November 14th, in 1400 in San Nicolás del Puerto, in Seville. With religious vocation since an early age, he was quite a traveler for such period. He started his religious life in Arruzafa convent―today Parador de Turismo―in Arrecife, where he was caretaker of the convent. He visited then many other places along Canarias Islands, Seville, Cádiz and Castile, and passed by many places in France and Italy during his pilgrimage to Rome on the occasion of the Jubilee year in 1450. While he was there, a plague was declared, and he was intensely devoted to take care and heal sick people.

Venerated in Spain and all America

When he came back to Spain he passed by a convent in Tendilla, Guadalajara, and in 1456 was moved to Alcalá, where he lived the last seven years of his life in the convent of Santa María de Jesús, working as gardener, vegetable garden keeper and caretaker.

This convent was demolished in nineteenth century and occupied by the Prince guard, next to Cisnerian University. He is a venerated and famous saint in countless places through Spain, where he is the Catholic patron of numerous towns, as well as in America―mainly Mexico.
The Franciscan order in California held its name. There, the mayor of San Diego donated in 1964 a small sculpture of the saint to Cristo de los Doctrinos brotherhood, currently kept in the garden of its chapel.

The nuns of the Immaculate Conception order of the convent of Santa Úrsula, in the street with the same name, have the honor of keeping the original tombstone of San Diego since five centuries ago, and a hand, also «incorrupt», as relic.

A curiosity of his great fame: Lope de Vega dedicated a sonnet to him: «The green ivy took root in the trunk», and a drama so-called «San Diego of Alcalá».