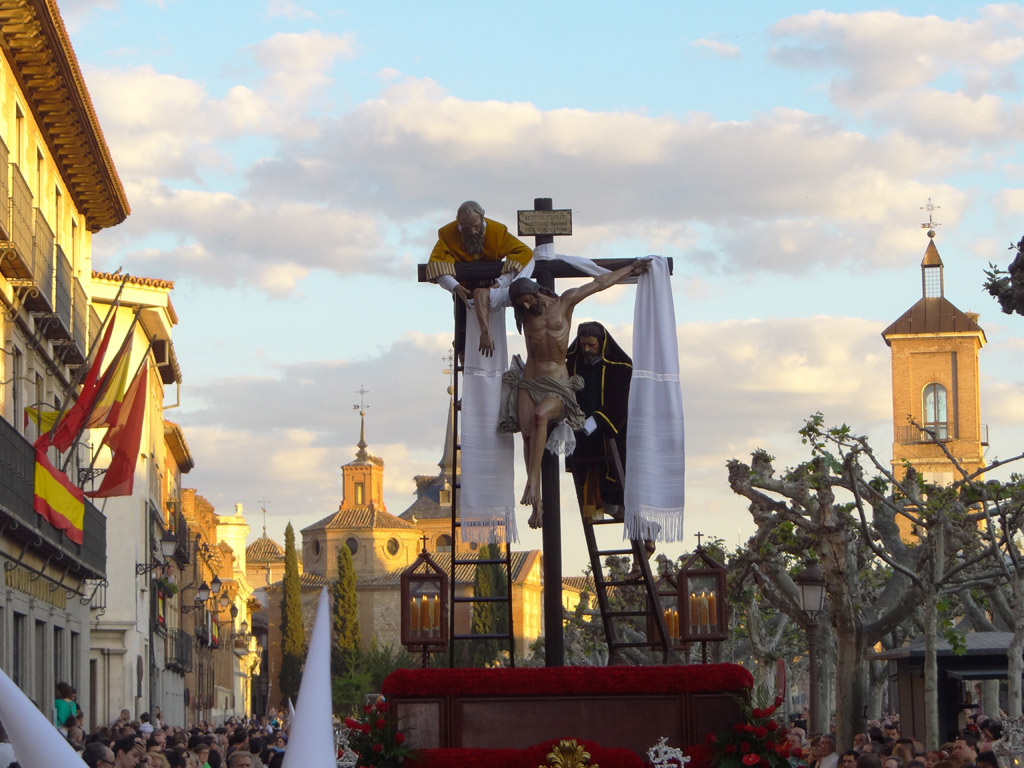 Holy Week is, without any doubt, the most important religious event of the year in Alcalá de Henares. Discover what makes it so important and why more than 100,000 people come to attend to it each year.

Holy Week— the Catholic Church tradition—has been celebrated in Alcalá de Henares since the sixteenth century. In many places all over Spain that period was considered as the birth of the religious event in which public processions and elements of scenography promoted the approaching between faith and common people.

After a long period of decadence and small participation, an incredibly recovering and boosting took place in the eighties’. Currently, it has become a real touristic phenomenon—besides being a religious one—, having more than 100.000 assistants , both Alcalá’s inhabitants and annual visitors.

From Humbleness to Glory

Celebration of Holy Week in Alcalá has evolved from the absence of processions—at the end of nineteenth century and beginning of twentieth—to its today’s great relevance. Tens of thousands of people are present into floats’ route—images of Jesus or Holy Mary on porters or costaleros’ shoulders. Costaleros are members of brotherhoods dedicated to the image they hold on their shoulders or on platforms with wheels.

During several decades in Alcalá, unknown reasons leaded to the absence of processions. Even though at that time Alcalá was a small population, there were other similar in size in which it was celebrated; however, they were took up again by 1917. During the Second Spanish Republic , it was prohibited to celebrate processions in the outside, so brotherhoods had to hold them into churches.

After Civil War , there were many years in which Alcalá de Henares had a modest celebration of the Holy Week —despite its number of convents, churches and images through the whole city. The greater decadence of the celebration took place during seventies’ and beginning of eighties’—a crisis common to the rest of Spain—due to the sociological changes happened unexpectedly in Spanish Society: each time more and more people went out on vacation in this period or have the idea of a Church linked to Franco’s dictatorship.

This image radically changed, religious celebrations acquired their own meaning and diverse Holy Week’s celebrations among Spain became a great touristic attractive—as it can be proved thanks to the biggest and most famous ones such as Seville’s, Valladolid’s, Zamora’s or Murcia’s.

The efforts of a festivities councilman impelled in the city, twenty five years ago, the increasing and growing of Alcalá’s Holy Week . His great deal of effort makes processions, floats and popular involvement to gradually grow up to become the most important Holy Week within the Community of Madrid —declared Fiesta de Interés Turístico Regional [Festivity considered to be of regional tourist interest] in 2004.

Around 5,000 penitents make up Alcalá’s brotherhoods and its diverse processions are seen by about 100,000 people, gathering both Alcalá’s inhabitants and visitors. That figures may give you an idea of the participation of Alcalá’s society in today’s Holy Week and its touristic attractive. During the eighties processions were called “sad” due to low popular participation, while today they talk about an “explosion” of Holy Week in Alcalá.

In Alcalá, processions are organized by nine brotherhoods of penitents and two of glory , which go on the street with twenty floats and holding several and different images. The images show Jesus life through stages previous to his death in the cross, or Holy Mary and some other saints and apostles.

Each brotherhood celebrates its own procession. However, Palm Sunday procession inaugurates Holy Week and is organized by the board which gathers all brotherhoods. The image of the famous “Little She-Donkey” ridden by Jesus while entering Jerusalem is its main attraction. The procession did not count with such image until 2006, when it was ordered by Brotherhoods Board . The woodwork was done in lime tree wood, and its value is around 50,000 €.

There is a brotherhood— Santísimo Cristo Yacente y Nuestra Señora de los Dolores— outstanding over the others because of being the only with three floats. During nineteenth century, just males of this brotherhood could participate into the period of penitence. Into such Station—named this way because the procession goes through a temple—, lampposts of the route are turned off , and the only light that shines is that of penitents’ wax candles and float’s candelabra.

A curiosity about Alcalá’s Holy Week is that one of its brotherhoods was made up by members of the festivity groups of Alcalá’s great festivities, at the end of August. It was in 1988—when the very same José Macías councilman—, Carmelitas nuns of calle Imagen were asked to allow during Holy Week the procession of the images of a Christ tied to a column. After asking also the group, both parts accepted the proposal and carry out the project named after its image.

The hall of residence of San Ildefonso, core of the university founded by Cardinal Cisneros, is included into the group route. Great part of its interior is covered by the procession, passing through Patio de Villanueva and going out by the main door of its monumental Plateresque façade.

Besides, Tourism City Councilor of Alcalá organizes the Processions Route, with guided runs in which visitors can approach to the most important religious milestones of the city Holy Week and to diverse churches and convents from which processions start, in a historical and monumental itinerary of the city. Along with local confectioneries, there is a campaign of spreading and preparation for penitents, including typical stuffed sweets of Alcalá from the period of Holy Week.