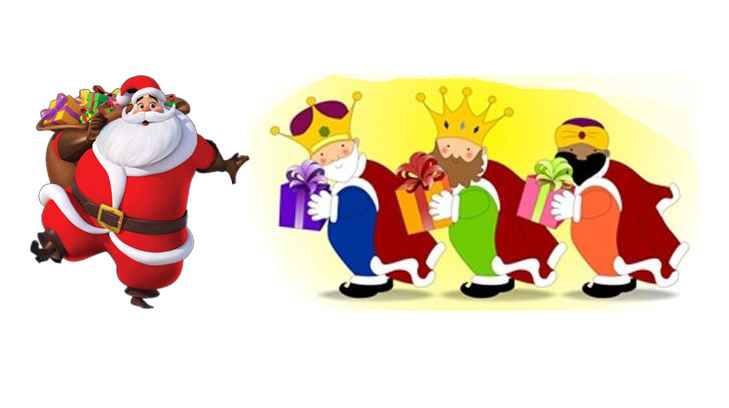 Although Santa Claus is also coming to Spain every Christmas, he is not the main figure giving gifts to Spanish kids. The three Wise men are instead.

In the western world, it’s assumed Santa Claus is intrinsic to Christmas. Some people complain that we’ve moved away from the original meaning of Christmas as a holiday to celebrate the birth of Christ, to a purely commercial event symbolized by Santa and his gifts. But here in Spain Santa isn’t very big. Of course Spanish kids get their gifts, the exchange of gifts is the same and kids write letters… but not to Santa. They write to the Three Wise Men (also known as the Magi or the Three Kings) who, according to the Christian story, visited Mary and the baby Jesus bearing gifts. 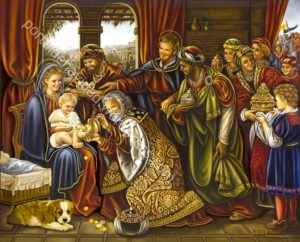 The big exchage of gifts doesn’t happen on Dec 25 but rather on January 6th, the day of Epiphany, or Twelth Night. On January 5th most Spanish towns celebrate the Cabalgata de Reyes, when the three kings arrive in the town and the children go out to see them and ask for gifts. It’s kind of like the Santa Claus parade in Norh America.

It’s a really nice tradition. It does make more sense and it preserves more of the Biblical story. At least it keeps Christ part of Christmas, because to explain who the three wise men are, you need to talk about Christ. But like everything else that is more local, this is being threatened by globalization as more and more Spanish kids want to get their gifts on Dec 25th… And some do both Santa & los reyes: 2 in every 5 Spanish kids get gifts on both dates. So Spain is a better option if you are a kid!

On 5 January Spain celebrates the end of Christmas with a great party where everybody gives and receives presents. It is to celebrate the arrival of the Three Wise Men – Melchior Caspar and Balthazar – to the city where Jesus was born. In the same way that the Three Wise Men gave gifts to baby Christ, here they share out presents amongst children around Spain – in fact; they are more popular than Santa Claus.

Before going to sleep, children put some milk and biscuits next to the Christmas tree for the Three Kings and some water for their camels. They also leave out their best pair of shoes to be filled with presents.

During this day, all families enjoy a piece of roscón (a sugar-frosted fruit-filled bread) for breakfast tradition says that the person who finds a novelty such as a coin or toy, in his or her portion will have good luck for the next year.

Both young and old enjoy opening their presents on this day, but sadly it also marks the end of Christmas.

The American version of the Santa Claus figure received its inspiration and its name from the Dutch legend of Sinterklaas (a Dutch variant of the name Saint Nicholas).

Dutch colonists took this tradition with them to New Amsterdam (now New York City) in the American colonies in the 17th century.

As early as 1773 the name appeared in the American press as «St. A Claus,» but it was the popular author Washington Irving who gave Americans their first detailed information about the Dutch version of Saint Nicholas. In his History of New York, published in 1809 under the pseudonym Diedrich Knickerbocker, Irving described the arrival of the saint on horseback each Eve of Saint Nicholas.

This Dutch-American Saint Nick achieved his fully Americanized form in 1823 in the poem A Visit From Saint Nicholas more commonly known as «The Night Before Christmas» by writer Clement Clarke Moore. Moore included such details as the names of the reindeer; Santa Claus’s laughs, winks, and nods; and the method by which Saint Nicholas, referred to as an elf, returns up the chimney. (Moore’s phrase «lays his finger aside of his nose» was drawn directly from Irving’s 1809 description.)

The American image of Santa Claus was further elaborated by illustrator Thomas Nast, who depicted a rotund Santa for Christmas issues of Harper’s magazine from the 1860s to the 1880s. Nast added such details as Santa’s workshop at the North Pole and Santa’s list of the good and bad children of the world. In the first Nast illustration, Santa was delivering Christmas gifts to soldiers fighting in the Civil War. The cartoon, entitled «Santa Claus in Camp» appeared in Harper’s Weekly on January 3, 1863.