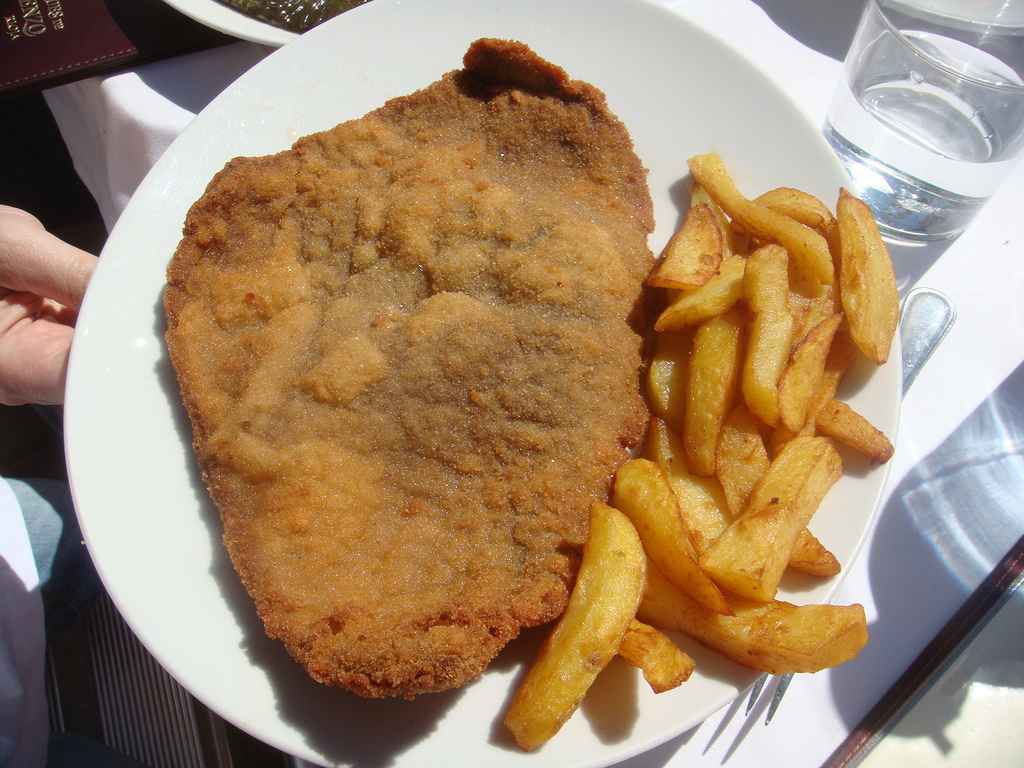 Spanish food habits and meal times are some of the most disconcerting subjects for tourists and people who, for the first time, settle in our country. As a general impression, we have little breakfast and too large lunch and dinner, at ungodly times.

Having a light breakfast in Spain is very common; plenty of people get up and just take a coffee, and then a sandwich or a snack in mid-morning. Others prefer coffee or tea, biscuits or cereals, or even a sandwich and some fruit or a juice; however, in general it is not usual to have a big breakfast. Even though there are countless cafeterias and hotels all over big cities offering special breakfast for tourists including scrambled eggs, bacon or baked beans; there are few Spanish who opt for beginning their day in such way. If you want to taste something typical Spanish, try a coffe with milk or hot chocolate with churros.

Breakfast time depends mainly on the time you start working or studying—school or university. Normally, work and studies timetables start before 8 o 9 in the morning and most people have breakfast before leaving their home. Although it is possible that some people have breakfast at 7 o’clock, there are others who do not have a bite until mid-morning, during some break at work or between classes.

Lunchtime is much more standardized than breakfast. In Spain, lunch time is about 2 or 3 in the afternoon, even though most restaurants start running about 13:00 or 13:30 and ends at 16:00. It is said that such a late timetable is caused by the need of postwar people of having two jobs to survive—one until 2 in the afternoon and another from 4 until night—so they necessarily have to eat during that brake.

Anyway, it might be worthy to observe that Spain is one or two hours delayed from its correspondent solar time. In the forties’, during the Franco dictatorship, he changed the Spanish hour so it could coincide with Central Europe time zone, specifically with Germany, when in fact, we should have the same time zone than United Kingdom. At the moment of truth, this implies that we have lunch about 12 or 1, approximately same time than other European countries, being the issue that official Spanish time is one or two hours out of phase—about three when talking about Galicia—from solar time.

An ordinary Spanish meal is compounded by a first and second dish, and a dessert. The first dish uses to be salad, soup, any kind of greens or vegetables, legumes or pasta; while the second dish is commonly meat or fish. During summer, it is more frequent to start with a salad while in winter, soups, broths and legume stews—such as beans or lentils stews—are more usual. As a rule, people usually drink water, though many others prefer to drink wine, wine with soda, beer or fizzy drinks.


Dessert is regularly a fruit, yoghurt or something sweet. In restaurants, desserts such as cakes, pastries or typical regional desserts are present; while at home, more often than not, just a fruit or a yoghurt are taken. At the end of the meal, it is usual to take a coffee.

Spanish dinner time is set in the period between 9 or 10 at night, another custom noticed as weird by foreign people who think it is a late time to have dinner. In Spain, dinner is similar to lunch— maybe some less plentiful dishes—and it ordinarily is composed by two dishes and a dessert. Currently, many people prefer to have just a dish, mostly in summer. In any case, dinners are not as frugal as in other countries.

Most of Spanish do not go to bed until midnight, as it is the time when films and TV series use to end. In Spain, prime time is set between 10 at night and midnight and not from 7/8 to 10/11, as in most countries of Europe and America.
However, the reason why Spanish have dinner and go to bed so late is not only TV, but also the amount of daylight hours and the climate, that being milder than in the north of Europe, invites to stay up late.

Of all European countries, Spain was not particularly known for its food for me. But within five months of living in Alcalá, I came to very much appreciate not only Spanish cuisine but also the way Spaniards eat.

Adjusting to the schedule was a bit of a shock at first. The family I lived with ate a small breakfast of coffee with milk and a few cookies. Lunch was at three and was the biggest meal of the day. When I couldn’t wait until three to eat, my Spanish “mother” would pack me a merienda, or snack, to bring to school.

During break, many students would snack on bocadillos, or sandwiches, that they had brought from home. It’s not uncommon for the whole family to eat lunch together during the week: parents return home from work and students from school.

Lunchtime meals were often prepared well ahead of time by my homestay mother. Some of my favorites included zucchini soup, stuffed eggplant with morcilla, and delicious meatballs with potato purée.

At ten o’clock we ate dinner and it was usually less of a production than lunch. Sometimes we would just eat fried eggs with bread and vegetables, or my favorite, the Spanish omelet. For dessert, yogurt and fruit was common.

It’s hard to categorize Spanish food but if I had to describe Spanish home cooking I would say there is an emphasis on eating with the family, cooking what is in season, and using little if any processed foods.