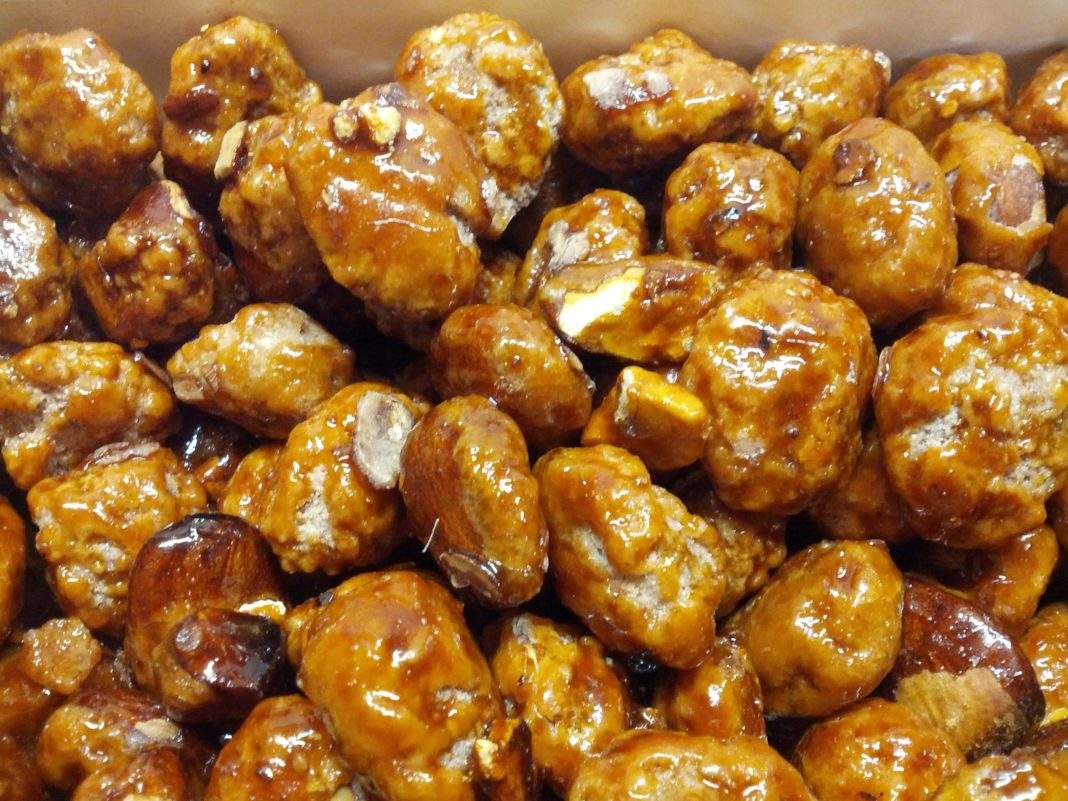 Almonds of Alcalá (glazed almonds) are Alcalá’s sweets par excellence, in addition to costrada and ring-shaped pastries. Probably of Arabic origin, there are documentary evidences of its existence since eighteenth century, so they have been traditionally famous as Alcalá’s gastronomic ambassadors.

A piece of advice
Almonds of Alcalá can be purchased in many confectioneries around the city, but to get them from the Convent of the Clarisas of San Diego— set up in seventeenth century (1670)—is the most traditional costume. The tradition—and respect to the enclosed nuns—requires the vendor nun to be hidden from sight during the exchange, carried out through a swivel window made of wood. First, you should place the money and then they will give you in return the correspondent box with the cherished almonds.

To “candy” is to cover something in a lumpy liquid, in case of Almonds of Alcalá, this liquid is syrup that dries up and covers the nuts. It is a simple recipe, in which the only precaution you should observe, is not to get burned with the syrup splash—which are very painful—for what it is very useful to wear gloves or similar. The tradition advices to prepare them in a pan or copper pot, so the almonds do not “stick” to the recipient.

This is the traditional recipe from the confectionary master Juan de la Mata, in his famous book “Arte de la Repostería” [The Art of Confectionery], from 1747: “A pound of almonds shall be taken—without removing the second shell—afterwards, place them in a rough cloth—or serviette—, fold that cloth, strongly, so any almond comes out, and shake them comprehensibly, completely cleaning the blight on the almond; add half pound of feathered sugar and cook it until getting a blowing mixture; let them aside and shake them with a wooden spoon until both, almonds and sugar, stay dried; then, return them over a low heat and continue shaking them around the cook plate, moving or turning the pot, so the almonds get covered with sugar until they get crunchy. A while after, they get totally dry so you can keep or serve them. You can prepare them any color you want; you just have to add coloring at the same time the mixture starts to dry.”

The delicious Almonds of Alcalá are made into the convent or monastery of the Clarisas of San Diego, founded in 1671 by doña Catalina García Fernández. Catalina García was the youngest of five children, daughter of don Bartolomé García and doña Catalina Fernández. She was born in Santorcaz in 1639, and lost her mother that same year. Thus, her aunt, María Fernández—who lived in a house today part of the convent—took charge of her. Catalina García got married at the age of fifteen, had three children and widowed in 1662. Since that moment, she tried to join one of the three Alcalá’s Franciscan Convents; although, it was not until 1665 when she got into the Franciscan Convent with the habits of the Third Order of Penance, and chose the name of Catalina de Jesús y San Francisco. In 1671, a school for girls—named Doncellas Pobres de Santa Clara—was created in a part of the house that her aunt, María Fernández, had previously donated with that aim. Afterwards, the school was turned into a beguinage (reason why they are called beguines) and later, into the monastery that it is today.

Almonds of Alcalá in Literature

Almonds of Alcalá are famous all over Spain, and thus, they are quoted by more than one illustrious writer. For instance, they are mentioned in the fundamental novel of Spanish narrative from the second half of twentieth century, “The River” , of Rafael Sánchez Ferlosio: “Though in this area we have but sugared almonds, in Alcalá de Henares. For heaven’s sake! The almonds! They are pretty famous! Aren’t they? Of course they are! They have your lordship, Alcalá’s almonds.”

Also the writer and journalist Luis Carandell talks about them in his book “El expreso de Madrid” [Madrid Express] where he says: “Sugared almonds! Alcalá’s almonds!” The shout of a vendor in Alcalá de Henares’ station was like a reward to the passenger who had passed the night on the train. He was almost arrived to Atocha’s station. About the end of the forties’ when I, as a student, native of Barcelona, living in Madrid, started to frequent the passenger cars of second class or, as it was called at that time, “Madrid Express”, travelling was truly an expedition.

(…)The buffets along the stations of the journey offered a great variety of local products: Alcalá’s sugared almonds, sponge soaked in wine and syrup from Guadalajara…”.

These monjas (nuns) are cloistered (meaning they can’t have any contact with the outside world), so there is a super sneaky way to buy almonds from them. You go through a door into a small room. There is a bell and a kind of turntable window. You can’t see the other side of the window. You ring the bell and wait for the monja to get to the other side of the window. The password is «Ave María Purísima» (Hail Mary most pure). The monja replies «Sin pecado concebida» (Conceived without sin). Then you tell her which size box of almonds you want. You put the money on the turntable, then the monja turns it around and BAZINGA! There are your delicious almonds.