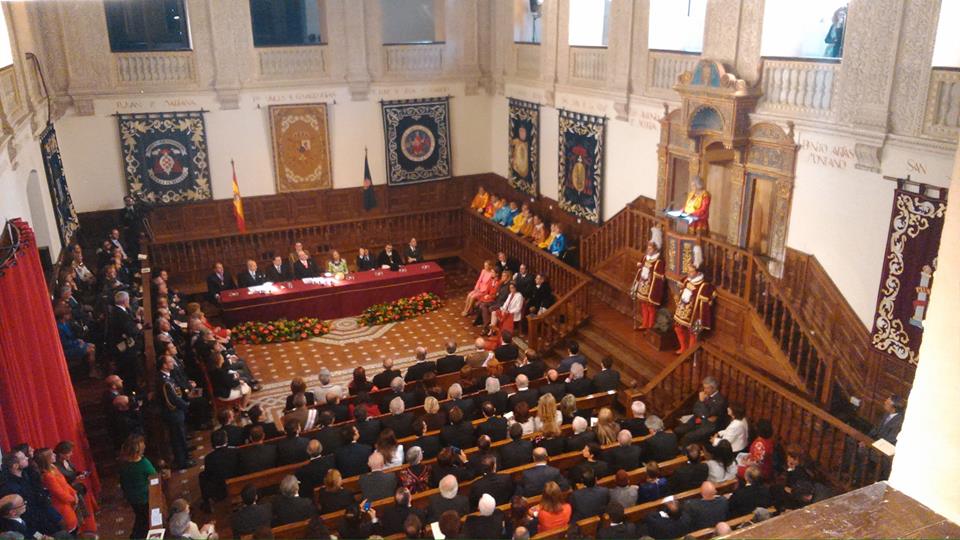 Miguel de Cervantes Prize of Literature of Castilian Language, most known as Cervantes Prize, is considered as the most important prize of literature in Spanish. Every year, into a solemn ceremony chaired by the Monarchs, the prize is awarded in the magnificent Cisnerian Assembly Hall in the University of Alcalá de Henares. The award is always conceded on April 23rd, on Book Day, and the anniversary of the death of Miguel de Cervantes.

Since its creation in 1976, most prestigious authors have received the prize, both Spanish and Latin American, from the poet of the generation of 27’, Jorge Guillén, the first awarded, to José Manuel Caballero Bonald, in 2012.

The Most Important Spanish Prize

The prize worth 125,000 euros—with five million pesetas in its first occasion—and it is awarded by the Minister of Culture of Spain, who chooses the jury of experts which examines the proposals made by Academies of Language—in Spain and every Spanish-speaking country—, as well as that of authors proposed by previous awarded writers.

It is the most important prize of literature written in Castilian because it is especially destined to distinguish the complete work of an author . Once an author wins the prize, they would be considered as a person who made a fundamental contribution to Hispanic cultural heritage, in any genre of literature, including poetry, narrative, essays…, or as it happens commonly, as a maestro in every or most genres.

The name, obviously, came from the worldwide known author, Miguel de Cervantes, native of Alcalá and author of the work considered as the highest top of Spanish literature, The Ingenious Gentleman Don Quixote of la Mancha.

The Cream of Literature

Up to that moment, 38 writers have received the Cervantes Prize, or Nobel Prize of Castilian letters, as it has also being named by mass media. All awarded writers are novelist, poets and dramatists, all of them a must to know for both Spanish and American literature during twentieth and twenty first centuries.

Among previous winners, there are poets such as José Emilio Pacheco in 2009, Antonio Gamoneda in 2006, Juan Gelman in 2007, or novelists Juan Marsé in 2008 or Ana María Matute in 2010, though it was the essayist María Zambrano the first woman awarded with Cervantes Prize, in 1988.

Besides, most members of the famous poets from generation of 27’ have been awarded, such as Gerardo Diego or Rafael Alberti and Dámaso Alonso. It is remarkable to say that two of the awarded writers also received a Nobel Prize: novelists Camilo José Cela and Mario Vargas Llosa.

While most of awarded authors are poets and novelists, the less awarded genres are journalism —to which Miguel Delibes and Francisco Umbral belonged—, and theatre—represented by the dramatist Antonio Buero Vallejo.

The Award: Excitement and Solemnity

The jury is formed by the director of the Spanish Royal Academy, the director of an American Language Academy—changing in turns depending on the year—, the previous year awarded author and six different characters of academic and literary world of Cervantes Institute—official institution dedicated to spread Spanish language and culture through the world—, Spanish universities, press associations from Spain and Latin American, and Hispanic international associations. This jury composition, of great variety and prestige, enhances even more the quality of the prize, if that is even possible.

The jury decides and announces its chose at the end of every year, but the official award ceremony is held on April 23rd, same day of Cervantes death and Book Day in Spain —set on such date commemorating the author. The act always has the same and stunning scenery, the Assembly Hall of the University of Alcalá, into plaza de San Diego—noble hall par excellence in the university, where all important acts of the institution are celebrated.

The official ceremony is chaired by the King Juan Carlos I, as the highest authority in the country, and awards the medal and prize sculpture to the winner. The minister of culture and other authorities such as the regional government president—Community of Madrid—and the major of the city are present with the king during the ceremony. The King and the minister of Culture pronounce respective speeches in which they gloss the life and work of the author, doing always references to both Miguel de Cervantes as classical author of Spanish language and to the current situation of Spanish in the world, as well as richness of culture from the point of view of its usage within the correspondent societies with Spanish as vehicular language.

For their part, the awarded—dressed up, as well as authorities and attendants, on theirs Sundays bests—also pronounces a speech when receiving the award. In their speeches, winners have talked about all kind of ideas and thoughts related with literature and language, keeping always Cervantes as universal and personal reference. Every winner is accepted as a great novelist or poet, as a maestro of letters and as a permanent influence of writing, from the most diverse angles.

In the closing act the Gaudeamus Igitur is sung, for some 20 years by Schola Cantorum Chorus and currently at the University of Alcalá Chorus, and sometimes some Spanish opera singers as Carlos Alvarez and Enrique Baquerizo, accompanied by the chorus.

Cervantes Prize cannot be divided, declared void or be awarded to someone posthumously. However, it was not like that since its beginning. The new rule was established in 1979, when the jury decided to divide the award between the Spanish poet Gerardo Diego and the eternal candidate to Nobel—who finally did not received it—the Argentinian José Luis Borges. In such time, the decision caused such a polemic, due to both authors’ writing quality and worth, that it was decided to turn the prize to become non-divisible.

Another curiosity to tell is that, even there is no written rule about it, every year the prize is awarded to authors in the opposite site of the Atlantic: one year, a Spanish author, and the next, a Latin American one, and so on.