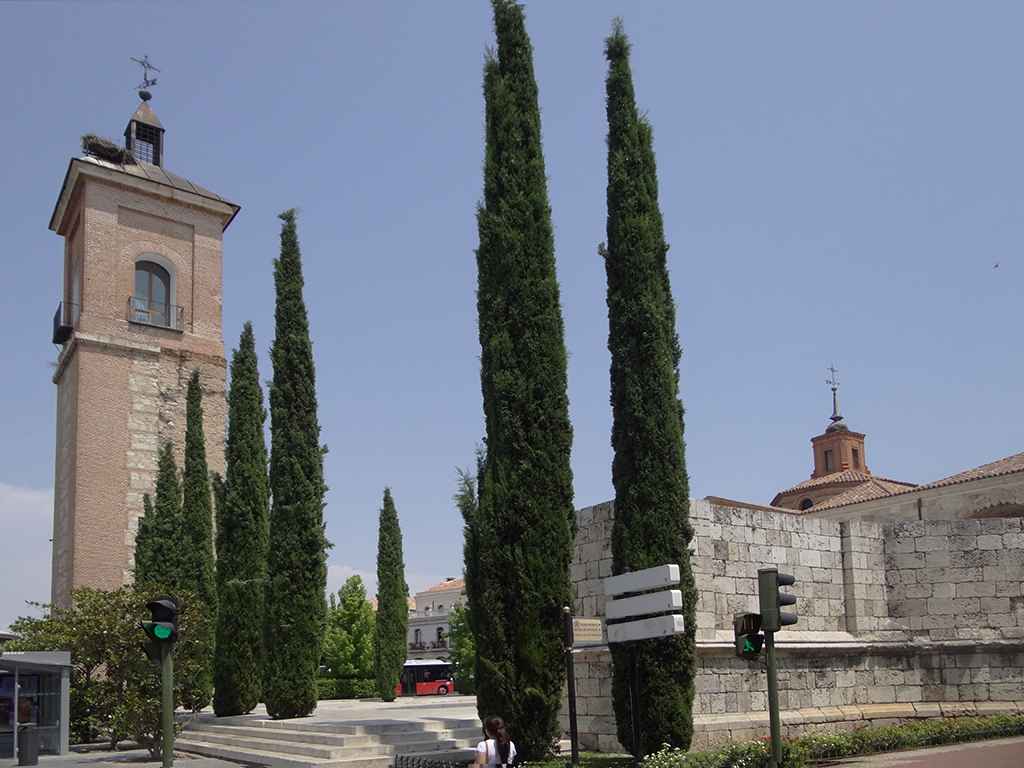 Reach the top of the tower after climbing 109 steps, 34 meters up, access its wonderful viewpoint and observe both Plaza de Cervantes and the Alcalá’s twenty centuries of history through its domes and buildings, perfectly identifiable from the heights.

When going around Santa María tower panoramic viewpoint and seeing the city in a bird’s eye view, you may keep in mind the following curiosity, that makes the relevance of the tower even more clear: the remains of the baptismal font where Miguel de Cervantes was baptized—October 9th, 1547—is found in its base. Those remains were used to faithfully reconstruct the font, and were moved in 1905 to its current emplacement in Oidor Chapel, where the restoration was undertook (for more information go to Oidor Chapel).

The old Santa María la Mayor Church and the Magisterial Cathedral one are the two big towers of Alcalá. This affirmation is based, though Alcalá de Henares is a city full of towers—and storks that make their nests in them—, on the symbolism of these two towers; the two great power cores of the city’s history: the Magisterial Cathedral that represents the religious power always exercised by Toledo’s Archbishops; and the Santa María tower, due to its emplacement next to the University, exemplifying the civil power that would arrive with the teaching institution peak since the sixteenth century.

Precisely, the Santa María tower is placed in Plaza de Cervantes, where the old market was situated within the boundaries of the city walls and outside the village in the Middle Ages. That is the reason why there are arcades in some sides of the mediaeval village while in others not, where the construction and expansion of University started, leaded by Universidad del Cisneros Cardinal and next to the City Council.

This Santa María tower—now lonely, next to the Oidor and Antezana chapels—belonged to the Santa María la Mayor Church, destroyed by a fire and bombed at the beginning of the Civil War. In this place, there is a shrine named San Juan de los Caballeros or de Letrán—dating back from the Middle Ages—founded by the Oidor or judge of the King John II of Castile as a familiar pantheon. The Archbishop Alonso de Carrillo moved the Santa María la Mayor church to the shrine emplacement in 1454, providing it with “the tower and its bells” ten years later.

In 1553, because of the building decline, the reconstruction of what it should have been a larger temple started and part of the shrine was pulled down. However, the project—designed by Rodrigo Gil de Hontañón, the Cisnerian University architect—was not totally finished due to economic problems.

Later on, at the beginning of nineteenth century, the current tower was erected to substitute the unfinished one of 1459. With the church destruction during the Civil War, the remains were used to repair other buildings, but not the tower, made of bricks and less serviceable.

In 1982, the Oidor Chapel was restored as Municipal Exposition Hall. Later on, commemorating the fourth centenary of Don Quixote’s publication in 2005, it was turned into the Interpretation Center “Los universos de Cervantes”.

However, almost thirty years should pass since Oidor Chapel restoring to fulfill, in 2009, the Alcalá’s inhabitants wishes of making the Santa María tower a monument able to visit, as it is today.