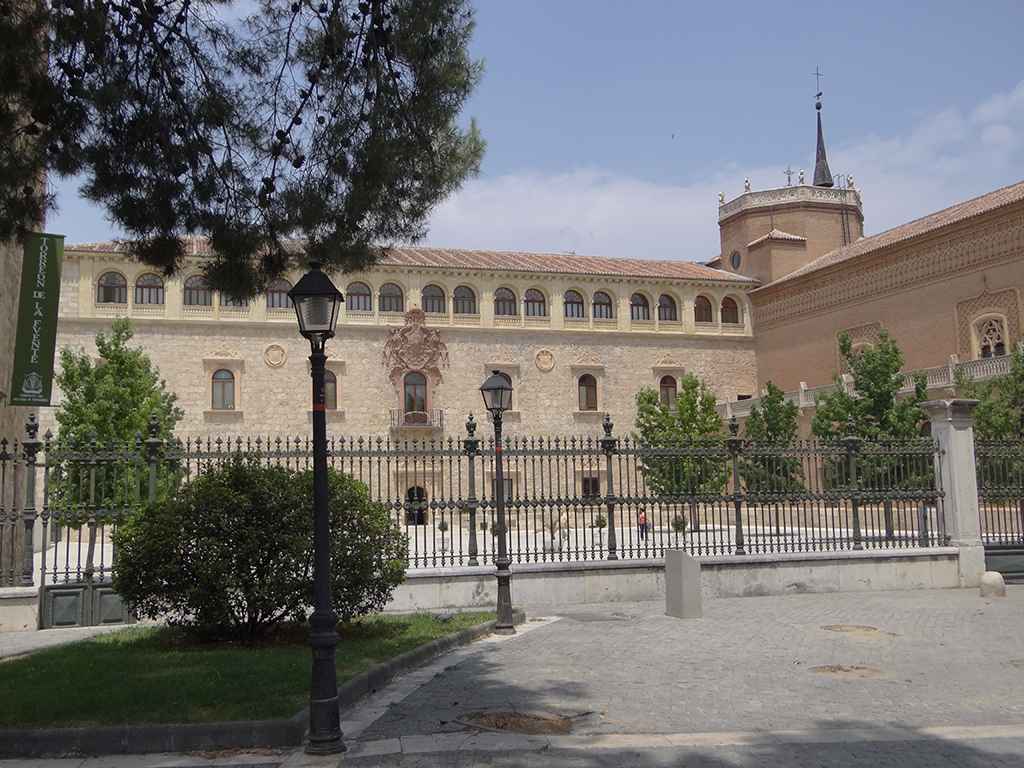 During its eight centuries of existence, the Archbishop’s Palace has witnessed the interview between the Catholic Monarchs and Christopher Columbus that led to the voyages to the Americas. After suffering destructions, fires, reconstructions, expansions and top moments; nowadays, the palace is the central office of Alcalá de Henares’ bishopric.

Due to the Alcalá’s belonging to the Toledo archbishop’s jurisdiction during eight hundred years, the Archbishop’s Palace is named as such—where the most pre-eminent primates of all Spain resided. Thereupon, Alcalá de Henares always was in a position of religious power, which was also, during centuries, synonym of political dominance. Over time, the building suffered fires and destructions, but also reconstructions and embellishment. Hence, it has survived the worst mishaps until today.

Since 1991, it is the central office of Alcalá de Henares’ bishopric; though, from 1858 to 1939, it was allocated as Archivo General Central del Estado [Public Record Office] head office, where all documents from diverse departments and governments—besides diocesans archives—are kept. Afterwards, that record would become the Archivo General de la Administración [Administration Record Office], also set up in Alcalá, next to Puerta de Aguadores.

Besides those uses, the Archbishop’s Palace has been an arsenal for tanks and munitions during the period of Civil War and after. Anyhow, the lack of prevention measures for flammable materials caused a huge fire, not the first happened in its history, but one of the most ravenous, seeing that it destroyed great part of the buildings and the three-century-old documentation kept in there.

In order to envisage the amount of artistic jewels that get lost from the Archbishop’s Palace, a small list of such objects includes: the Mudéjar coffered ceiling from Salón de los Concilios, the monumental Covarrubias stairs—same name of the façade’s author—, the Fonseca’s and Aleluya’s garden, the façade of Ave María’s garden, countless paintings and the first Museo Arqueológico Complutense [Complutensian Archaeological Museum].

Some of the charred remains of the Archbishop’s Palace were reconstructed while other jewels, restored, still can be visited today. The Antiquarium, where some of the aforementioned remains are preserved, can be visited through the Tower XIV. The Ave María galleries, the great Fonseca’s garden and the famous Covarrubias stairs have been recreated.

Curiosity
Since several decades ago, an outdoors performance of the play “Don Juan Tenorio” from José de Espronceda is put on Alcalá. The representation is carried out in several monuments of Alcalá, always including the Archbishop’s Palace which, sometimes, has been the only scenery.

A Center of Power

King Alfonso VII turned the village of Alcalá into a manor, as a Toledo bishopric dependency, in 1129. A little after, in 1209, the archbishop Rodrigo Ximénez de Rada (1208-1247)—who arranged that one of the two Toledo’s curates had to live in Alcalá—commanded to build a residence-fortress, originally Mudéjar style, that would suffer several transformations, going through different architectonical styles depending on the period.

Inside the Archbishop’s Palace, numerous diocesan councils and several historical decisive events have been held, such as the Treaty of Alcalá, by which the Monarchs of Castile and Aragón shared out reconquered territories of Al-Ándalus.

The Cortes were also held into the Archbishop’s Palace in 1348, and the Ordenamiento de Alcalá was enacted, by which the administration of justice was unified for all the lands that were part of the Crown of Castile. The palace was as well the meeting point for the royal court, receiving events such as the most famous in which Christopher Columbus, in January of 1486, was interviewed, for the first time, by the Queen Isabella the Catholic; and the germ of his travel to the Indies was seeded, resulting in the Discovery of the Americas.

Several figures of the court live into the Archbishop’s Palace and the Castilian King John I died in there, in 1390, after falling from his horse in the nearness. Other monarchs used the palace as a temporary residence, as, for instance, the Catholic Monarchs, reason why their daughter Catherine of Aragón—who would be Queen of England, as wife of Henry VIII—was born in there. Ferdinand I of Habsburg, son of Joan the Mad and heir of Charles V—I of Spain—, German emperor, was also born in the Archbishop’s Palace.

The palace main façade can be admired in its entire splendor, the jewel of the Archbishop’s Palace; it becomes evident even before crossing the wonderful nineteenth-century grille made in Belgium. That Renaissance style façade was designed by Alonso de Covarrubias in the sixteenth century and it is divided in two bodies and three heights.

In the center of the wall section, a rounded arch door—crowned by the Fonseca archbishop coat of arms—is founded between Ionic columns. Above that composition, a central balcony is observed, with a rounded arch door and a huge Baroque coat of arms made of terracotta—that of the infante Luis Antonio de Borbón, son of Philip V, who substituted the former Charles I.

Right to the façade, on the eastern wing, the Tenorio Turret is situated. Constructed by the archbishop with the same name at the end of fourteenth century, currently, the turret is the head office of the diocesan library, able to visit in business hours.

The Archbishop’s Palace, with such a long life, has suffered many transformations and architectonical changes through the centuries. The major and most important restorations were performed by bishops Fonseca and Tavera—from sixteenth century—and those of the architect Manuel Laredo, when the building was subjected to a great restoration—especially to the aforementioned east wing. Manuel Laredo, also author of Laredo’s Palace—situated at paseo de la Estación and inspired by Neo-Gothic and Neo-Mudéjar style.