The Instituto Cervantes’ collection opens to the public with a selection of etchings done by some of the most prestigious Spanish and Latin American artists from the second half of the 20th century. The show tells us about the search for influences, ascendants and references, as all of them have been inspired by pictorial and literary sources, such as the masters from the Prado Museum, Don Quíxote and Lorca’s poetry.

In a seminar directed by Francisco Calvo Serraller, twelve Spanish artists from different generations were invited by the Amigos del Museo del Prado Foundation to reflect and use their brushes to show what connects them to other works from the museum’s collection. The images that come from this encounter are as diverse as the aesthetic proposals and sensibilices of the invited artists.

The Chilean artist Matta, an expert on Quixote, graphically translated the work in several series of images which clearly show the desire for justice and a love of freedom, qualities he very much admired in Cervantes’ master work.

Lastly, the Madrid artist Lucio Muñoz, known as a «pictorial informalist» whose work has been influenced by music and poetry, chose Federico García Lorca’s poem Llanto por Ignacio Sánchez Mejías [Weeping for the Death of Ignacio Sánchez Mejías] as his source of inspiration for a series of engravings.

Inspired by the two universal literary geniuses, the portraits of the main characters from Cervantes’ Don Quixote and Shakespeare’s King Lear appear in the sculpture, both as dual images of sanity and insanity. On the back, the spiral represents the faces of Marcela and Cordelia, characters from these literary works who, for the artist, symbolize moral nobility.

Inspired by the two universal literary geniuses, the portraits of the main characters from Cervantes’ Don Quixote and Shakespeare’s King Lear appear in the sculpture, both as dual images of sanity and insanity. On the back, the spiral represents the faces of Marcela and Cordelia, characters from these literary works who, for the artist, symbolize moral nobility. 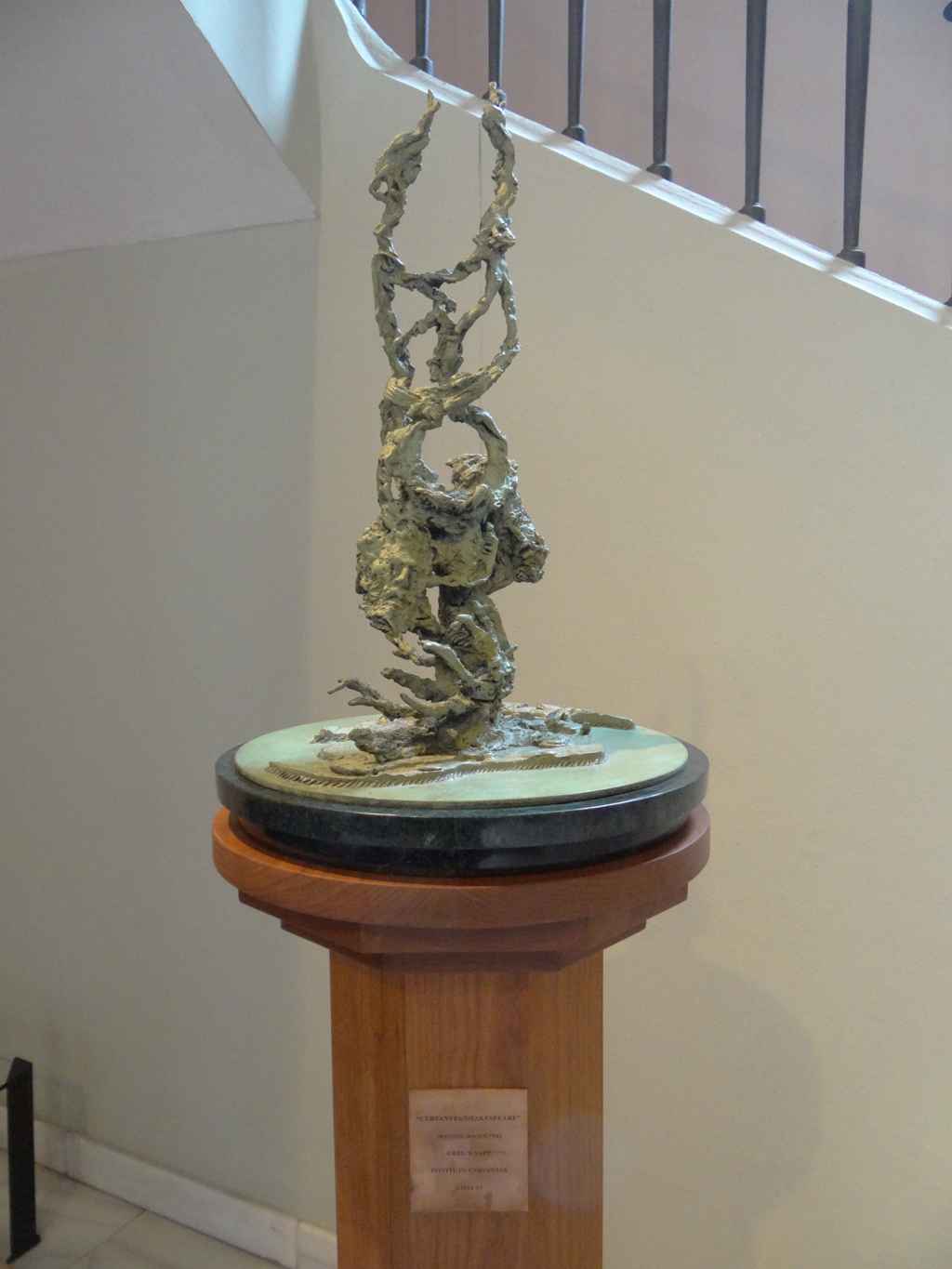 Born in 1949, in Grand View-on-Hudson (New York), Greg Wyatt is a Sculptor with a solid education: he studied Art History at Columbia University, and Classical Sculpture at the National Academy of Design’s School of Fine Arts. He has been a professor at New York University and at Jersey City State College, and sculptor-in-residence at the Cathedral of St. John the Divine, in New York.

His artworks are part of important international institutional collections, and have been exhibited at the Metropolitan Museum of Art and Harvard University, and are currently in more than twenty public city spaces, from New York to Beijing.

Wyatt combines tradition and modernity: classical bronze casting technique and the detailed work of the metal smiths, with other traditional cultures from Europe, North America and South America. Formally, his sculptures are characterized by the torque of the figures that appear to emerge from the material itself, legacy of the Italian Renaissance.

The art historian Anthony Janson defined his work as «spiritual realism» for the way he is inspired by literature, philosophy and mythology in order to create his masses of shape, space and energy.

Stanly Wells, Shakespeare academic specialist, comments, «I compare Wyatt to Rodin. He is that good. (…) Wyatt emulates the sculpture from the western world with contemporary vision.»

Exhibition to Celebrate the 85th Anniversary of Paradores