The delicacy named Costrada, in conjunction with sugared Almonds of Alcalá and Alcalá’s ring-shaped pastries, are the three main confectionaries of Alcalá de Henares’ sweet gastronomy.

These three pastries are closely linked to Alcalá’s history through its two most famous confectioneries: Salinas , which opened its doors in plaza de Cervantes in 1846, at number 21; and El Postre, nearly as old as the former, at calle del Tinte since 1926.

Both confectioneries disappeared a few years ago due to economical ups and downs, though they have still being present for many years in Alcalá’s inhabitant’s memories as an unforgettable childhood memory, or even older. Riquelme—or Paraninfo (calle Mayor 75) another famous confectionaries—are still working and offering costradas as well as many other typical sweets with notable expertise.

The costrada is a delicious cake made with puff pastry filled with cream and meringue and covered by chopped almonds cooked au gratin. As the years went by, local and national people spread its fame until today, when the costrada is offered in almost all city’s restaurants. In many of them, they are curiously served with custard.

When it was possible to taste this dessert inside the Salinas’ confectionary, the inside of the pastry shop managed to transfer you back in time with its classical and precious decoration, surrounded by its privileged situation under one of the two arcades of plaza de Cervantes.

Even today, a curiosity continues hidden inside the building, where great part of the old props, tools, molds and other appliances used by confectioneries in the past are kept in lumber rooms.

But do not think those are the only curiosities about costrada’s history as Salinas confectionary being supplier of the Royal Family or the existence of another centenarian pastry shop with the same name in Tudela, Navarra, that also makes costradas—including into the recipe pear’s marmalade—though it is more famous because of its iced buns.

The last coincidence finishing the catalogue is the existence of a Count of Salinas, don Diego Pérez Sarmiento, who was pastry-chef, and not a common one, but the supplier for the Catholic Monarchs.

The two aforementioned pastry shops already disappeared—Salinas and El Postre—have been considered by everyone as the creators of Alcalá’s costrada recipe. By reason of its seniority, it is thought that maybe Salinas was the leader, though the second—as its founder daughter claims, Marival Gómes—was the shop that introduced the costrada in Alcalá using a family’s friend recipe, Conchita Azaña, based on a dessert she had tasted in a wedding in Zaragoza.

Luckily, and despite the disappearance of both confectioneries, Salinas employees have opened a new pastry-shop at calle Mayor, so its memory is not entirely lost, and you can delight yourself tasting costradas while visiting the historical Alcalá’s city center.

Here it is the classical Alcalá’s costrada recipe. First of all, you have to prepare the meringue, as it is stated in “Arte de repostería” [The Art of Confectionery], of Juan de la Mata, 1755: “Once six fresh egg whites are whisked, half pound of feathered sugar should be gradually added to the mixture, lukewarm and homogeneous, or whitened with some lemon or orange scratches. Mix the pastry until it is finished, it means, take a spoonful of mixture and drop it; if it remains at the top of the mixture, the meringue is done to perfection.”

Later, you have to prepare the custard cream. Then, you should place the costrada patiently and carefully having three puff pastry layers. Firstly, grab one of the layers and cover it with meringue. Secondly, place another layer over it and add a generous cover of custard cream, completing the whole with another thin layer of puff pastry. Dress the top with meringue and place chopped almonds and icing sugar over it. Put it into the oven until the almonds get roasted and you will finally have your costrada,that you will serve cold.

Discover how to prepare Costrada 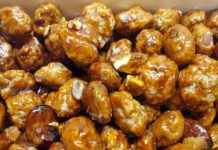 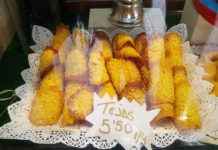 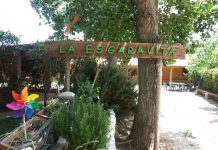 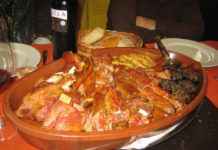