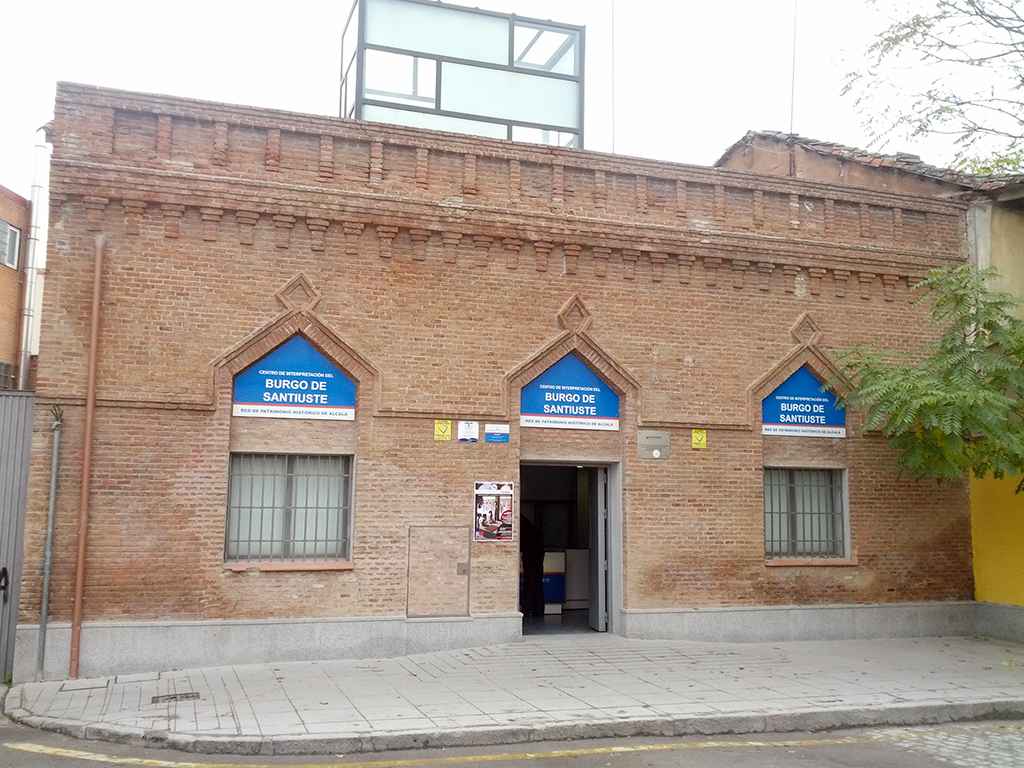 Burgo de Santiuste is the mediaeval name of Alcalá de Henares. In the center of the city, you can go through a journey dedicated to its ten centuries of history, between the fall of the Roman Empire in 476 to the creation of Cisneros Cardinal university in 1499.

Burgo de Santiuste Intepretation Center was opened in March 2010, and covers the hole left by the museums of the city telling the history of Alcalá in its mediaeval period. It is placed in a nineteenth-century building next to the walled enclosure and the Archbishop’s Palace.

The Five Names of Alcalá

Burgo de Santiuste Intepretation Center has a base floor, a first one and a basement. In them, you can discover the past of Alcalá through an open space full of great panels with street maps, texts and photographs, several monitors with interactive videos, facsimile copies of important documents basics for the city’s history—such as Fuero Viejo [Old Priviledges]—and some original sculptures of great value.

Within the building, the unknown Alcalá’s history is showed. The construction, as the great majority of buildings present in the historical center of the city, dates back from sixteenth and seventeenth centuries and after. You will find information about post-Roman Alcalá, when the city was known as Complutum—as Visigoths continued calling it—, turning little by little into Campo Laudable.

Physically extended around the Magisterial Cathedral, the city was placed in the same land where it was Qal’at Abd al-Salam—meaning “The Castle of Peace”—, Muslim Alcalá, to become afterwards Burgo de Santiuste in the twelfth and thirteenth centuries, after what its name was gradually consolidated as the current Alcalá de Henares.

An interpretation center —clear denomination of such kind of museums—has the aim of connecting historical and artistic objects to transmit to help people to best comprehend the history described in the center. Burgo de Santiuste Intepretation Center is located in a very appropriate environment, next to what it was Campo Laudable, where currently are Magisterial Cathedral and calle Victoria, a few meters away from the Archbishop’s Palace, built in 1209 by the Archbishop Jiménez de Rada.

The building is in front of the walled enclosure and has 227 square meters. It has about 110 original pieces from different places of the very same city, besides two important sculptures and models representing the Puerta de Burgos, one of the mediaeval entries to the city—currently into the vegetable garden of Bernardas Convent—and a waterwheel. Several 3D reconstructions can be also contemplated and consulted in several interactive screens what the village of Alcalá was like in the time of Burgo de Santiuste, the town planning and its inhabitants’ lifestyle in the period in which the village had three neighborhoods with three religions: Christians, Jews and Muslims. A quite pacific cohabitation testified by Antezana’s Hospital—founded by the couple with the same name—, placed in calle Mayor, where it still, in front of one of the two synagogues, in the middle of the Jewish quarter.

A History in Three Floors

The Burgo de Santiuste Intepretation Center divides the route in three floors: the first visit is performed in the ground floor where the access is, then, you go up to the first floor and, finally, end the visit with the basement. In the ground floor, once the reception is passed, you can go back in time through Alcalá’s history, since prehistory to the beginning of the Christian era, the period from Romans to the eighth century and since then to nowadays, thanks to the three showcases. In this floor, you can also contemplate three interactive monitors in which different settlers of Alcalá are shown, from an aerial view, a summary of village and city history, and the ten most significant pieces of the Center.

The first floor holds the core of interpretation center, where to know the development of Burgo de Santiuste along Middle Ages. For that purpose, there are five didactic panels with four showcases containing representative objects, as well as audiovisual support. The panels show the following topics: “Middle Ages”, “Settlers: Campo Laudable. Fifth to eleventh centuries, Qal’at Abd al-Salam (The Old Alcalá). Eight to twelfth centuries and Burgo de Santiuste. Twelfth to fifteenth century”.

Showcases, texts and objects from that period describe what Visigoth Alcalá was and the lifestyle of the city in the limits between Christian Monarchs of Castilla y León and Toledo’s Crew—until it was finally conquered by the archbishop Bernardo de Sedirac in 1118. Their daily activity and lifestyle is also showed. Likely, you can see the evolution of Burgo de Santiuste as Christian village—developed under the protection of Toledo’s archbishops between twelfth and fifteenth century, when the fortress after turned into the Archbishop’s Palace was stood up—and the walled enclosure with its twenty towers almost totally able to visit today (see below image) with an additional enclosure surrounding and protecting the whole city, to plaza del Coso, current plaza de Cervantes.

Thus, you can contemplate the height of the Burgo, the building of the church of Santiuste, afterwards becoming Magisterial, its calle Mayor and its three neighborhood structure, Christian, Jewish and Muslim—an urban planning which, along with the expansion given by Cisneros Cardinal University, would originate today’s Alcalá.

The basement is the part of the museum where the route is over, centered thus at the end of Middle Ages and beginning of Renaissance, which preceded the birth of Modern Period. Audiovisual and interactive monitors will give you information about Fueros, the Old and the New—laws ruling the city—, the Papal Bull of Pope Alexander VI—authorizing Cisneros to create the University of Alcalá—, as well as many other important documents, such as the Polyglot Bible—which will help you to know in depth the background of the Center contain. In the hall where you finish your visit, admiring San Lucas and San Nicolás statues—from San Lucas Hospital, place in plaza de Atilano Casado. Those art pieces are chosen for closing visitor’s route, because they are the best model of the new historical period arrived to Alcalá de Henares.