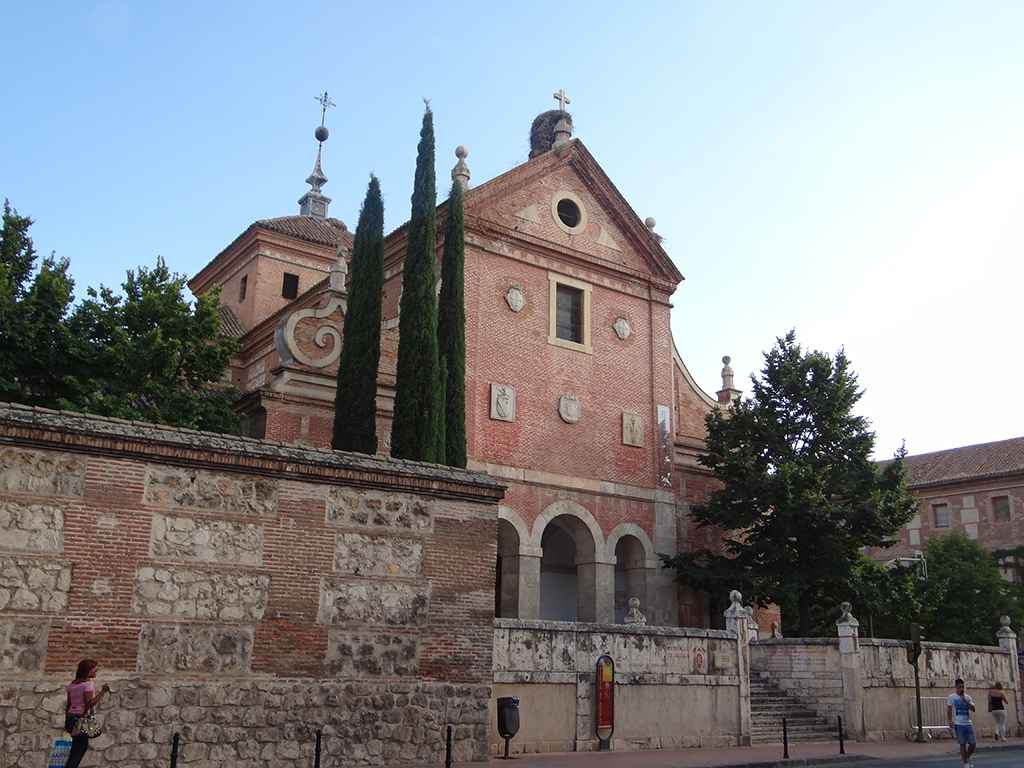 The Discalced Trinitarian Convent is a great example of the glories and miseries of the city of Alcalá. Since its foundation by modest monks, it has been promoted by a noble with Finnish origin, turned into a quarter of cavalry during the nineteenth century, into Command Headquarter, and over the last years it was restored to hold the university Instituto Franklin of Researching in relation to American Studies.

To the intense history of Alcalá, reflected as if it was a mirror in this Discalced Trinitarian Convent, it should be added the crossing of destinies of the religious order with the father of the Spanish novel, Miguel de Cervantes. The notable writer was rescued in 1580 by Trinitarian monks— Juan Gil and Antonio de la Bella, who paid to Saracens five hundred escudos (old Spanish currency) to release the writer—from the prisons of Algiers after five years of captivity.

The Discalced Trinitarian Convent is situated in the street with the same name which leads to plaza de Cervantes, and square with colegio de Málaga—head office of the faculty of Philosophy and Letters of the University of Alcalá. First, it was a small house purchased by the founder, which looks out onto callejón de Mataperos, and a couple of years later he bought a pair of more houses, where he and his companions allocated an hospice.

The place was gradually extended until, after some frictions with colegio de Málaga, they exchanged their lands. In 1626, the convent started to be constructed, ended in 1639, it was linked to the university campus designed by Cisneros.

However, the church settlement took more time. The construction began in 1649 thanks to the resolute sponsorship of the marquis of Monasterio and the important Italian financial Octavio Centurión—who besides supported for a long time the religious community. The work is attributed to the maestro Sebastián de la Plaza, who occupies its place in an alley of Alcalá, near plaza de los Cuatro Caños or Puerta de Mártires.

Unlike Hitchcock movie, you will not find any suspense in the reflexive silence typical of temples, cloisters of convents and libraries, so not for nothing there are not one, but several.

The eleven steps are those of the flight of stairs in which top you may access to a small market—or open-air porch—with a low wall surrounding it. Placed in front of the three Roman arches entry—through which you access the church—you will find a two-height garden with arches, on the left of the façade and next to the convent.

The fact is that the church and the school-convent are above the street level. Thus, the basement is the ground floor—as you may observe in a side of the calle San Julián—, giving the building a rather peculiar aspect within the whole monumental center of Alcalá, clearly outstanding among adjoining buildings.

The church inside the Discalced Trinitarian Convent has the Crux immisa shape, divided in four sections, with a dome over the transept—or center—which is seen from the outside as a square tower, following the outline of a design of Juan de Herrera and his disciple Francisco de Mora. Their style has been strengthened as the typical of seventeenth-century Spanish churches.

In 1994, after going past the Trinitarians building and the university, a balcony of the center of the façade was removed and in its place, its patron coats of arms were placed—Octavio Centurión, Command Headquarter and the University of Alcalá, as well as two emblems of the Trinitarian Order flanking the window enlightening the chorus, from the superior triangular pediment reflecting the different stages by which the convent went by.

Curiosity
This Discalced Trinitarian Convent count on something of great value: stored snow. A snow well was one of the few and rare luxuries that a religious community could have in that period.

A curiosity related to the Discalced Trinitarian Convent is that it counted on something of great value: stored snow. A snow well was one of the few and rare luxuries that a religious community could have, a luxury the city holds as well, as it had some snow storages safely hidden in the closest hills or in the convent, into wells at the basement.

Afterwards, like ice or powdered, the snow was used as food and drink. It was also possible to sell it under the possession of a Royal license that gives the vendor the monopoly of the market, only subjected to taxes. The original Trinitarians had their own license, vouching that royalty allowed them, for instance, consuming 1408 pounds of snow during the year 1771.

In 1839, after the Ecclesiastical Confiscation by which the Government of that period expropriated numerous goods to the Catholic Church, both the church and the convent were ceded to Arma de Caballería, which motivated that the inside was allocated for uses characteristics of the army. Later on, it became the Command Headquarter, which conveyed new alterations, like two decorative cannons placed aside the staircase.

After the restoration undertaken by the university in both, convent and church, in 1996, the original state was tried to be recovered. Today, it is the head office of the Center of American Studies, including collections from Instituto » Benjamin Franklin» and from Cervantes’ Library, with near thirty thousand reference and lending volumes.