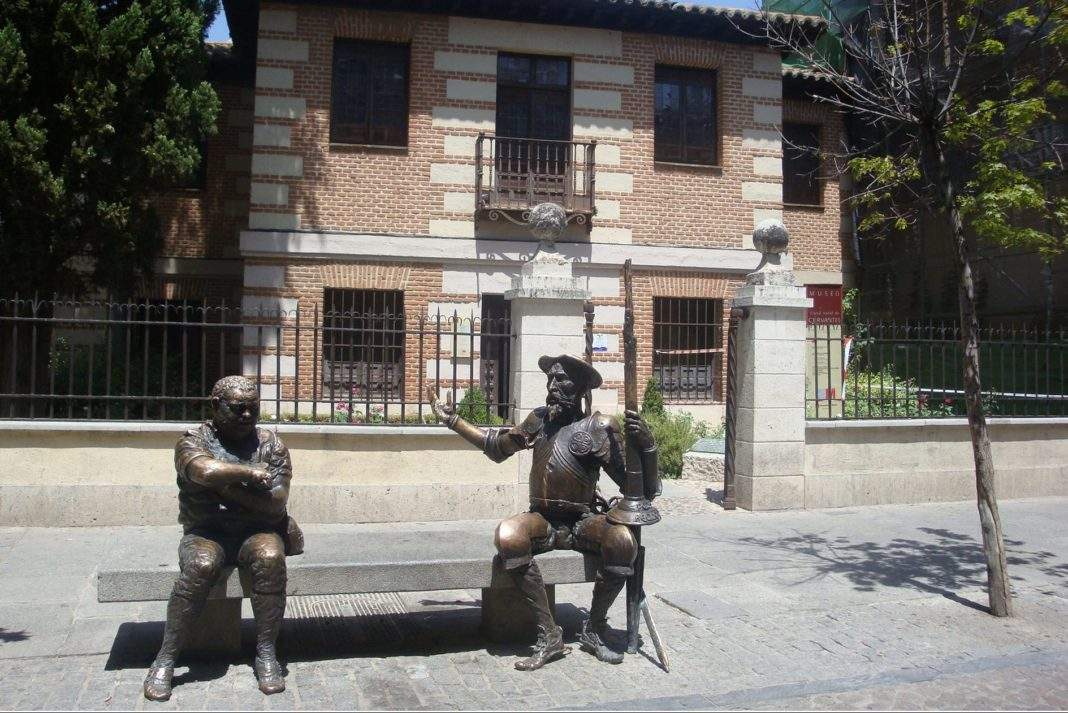 The house where Miguel de Cervantes was born, on 29th of September of 1547, has been turned into a museum in which you can observe how was it like to live at the time Don Quixote’s author lived.

Cervantes Birthplace Museum  is a monographic museum owned and managed by the Community of Madrid, situated in the building where, according to experts, the writer was born. It recreates the distinct atmospheres of a wealthy house of the sixteenth and seventieth centuries, by means of a setting that enables visitors to perceive the presence of its former inhabitants while going through their day-to-day routine.

The number of visitors has increased over the years, up to an average 150.000 visits per year. The year 2005 saw the biggest increase in visits, when a total of 211.164 people stopped at the place.

If, upon arrival to Alcalá de Henares, you intend to visit the Cervantes Birthplace Museum-at the junction of calle mayor and calle Imagen-, first thing you will probably hear from the oldest inhabitants of the city is that they saw how the house was built and so, therefore, such house is not the true Cervantes birthplace. However, nothing could be further from the truth; according to scholar Luis Astrana Marín’s notable 1948 research —native of Alcalá—Miguel de Cervantes was indeed born in this house, whose main entrance was originally at calle Imagen.

In the wake of such research, confirmed 20 years ago by the finding of some friezes at the Chemistry, the city council restored the house in 1956 and turned it into the Cervantes Birthplace Museum, reason why people thought they had seen the house construction.

Although the restored house has been set as if the inhabitants would have been a prosperous family, Miguel de Cervantes’ relatives were not rich, and it is pretty certain that the house was shared with other families. Notwithstanding that, the museum very accurately recreates the lifestyle of Alcalá’s sixteenth century: every single room truly mirrors the atmosphere at that time, including Rodrigo’s—Cervantes’ father— room, who used this area to provide his treatments as surgeon (a similar job to the one accomplished by nurses.)

From the Cervantes Birthplace Museum’s courtyard, at calle Mayor, there is an access to the central garden—an architectural, traditional element of Alcalá’s houses. It is composed of eight granite columns and calcareous stones, with Corinthian capitals that support the balustrade and lumbers of the upper story. From one of the garden’s corner you can see an octagonal well dating back from that period.

The garden bounds to the ladies’ room, a characteristic room at the time, where women gathered to read, sew, listen to music or simply chat. In the past, the room was typically furnished with Moroccan sittings, that is, in-floor cushions, and small pieces of furniture such as footrests, chests or little desks. There might also be low stools for gentlemen, who could only enter the stay under invitation.

In this room, where guests were welcomed, you can observe wing chairs with leather back, desks or tables, and huge braziers to warm up the sojourn during winter. Desks were covered with clothes, as well as the walls were covered with embossed leather: a fine and adorned sheepskin you may observe in that image.

Leaving the garden, a corridor leads us into the Chemist or Rodrigo’s room, Miguel de Cervantes’ father and a zurujano doctor. Those “ancient surgeons” carried on more tasks than barbers, such as the performing of bloodlettings, but few than doctors.

In that room there is a surgeon table, a sofa where patients sit, and a Mudejar closet for medicines and cures—mostly made of herbs and different pottery—, everything original of the sixteenth and the seventieth centuries.

Dining rooms, as we know them today, did simply not exist at the time. There was but a game room where a table was arranged, so that the room was fitted to serve food. After diner, cutlery and crockery were taken away along with some vintners, the candlestick used to light up the room, or the polygonal brazier used to warm up in winter. Once again, all instruments date back from the Golden Age.

You can enter the kitchen from the dining room where, if you are a Spanish or Mediterranean visitor, you may be familiar with a number of instruments, as many of them-dating back from the sixteenth century-are still used in several rural areas of Spain.
Everything has been disposed so as to clearly show how day-to-day life was at the time, with the kitchen as the epicenter of daily routine. If there were servants in the house, they would even sleep in that stay in many occasions.
In the storeroom, once it has been restored, audiovisual material about Miguel de Cervantes’ life is showed.

Go on reading on this topic:

The museum is being provided to make accessibility easier to blind people or persons with visual impairment among others, thanks to a collaboration agreement between ONCE (National Association of Spanish blind people) and the Community of Madrid.

Go on reading on this topic: