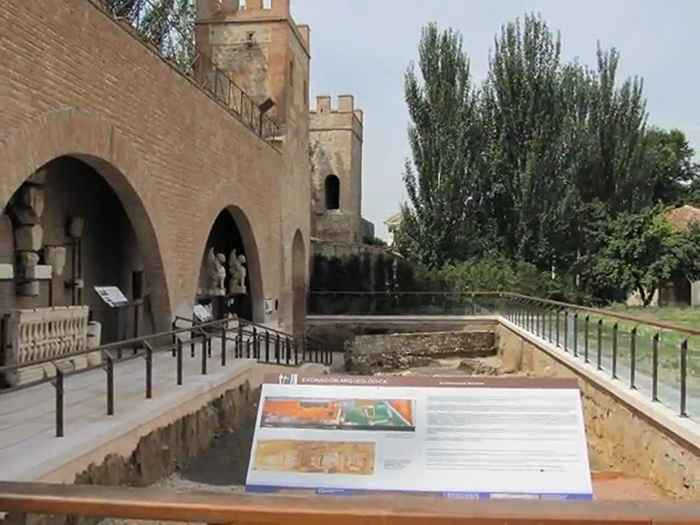 The Antiquarium and the Fourteenth Tower

The Antiquarium, an open museum holding a wonderful collection of fragments of Archbishop’s Palace original interior, gathers important remains of the heritage lost during the fire of 1939. Placed in the eight tower of the walled enclosure, it was recovered to its original condition after an extensive restoration.

The Postern of the Tower

The postern or opening in the towers works as if it was its door. Not so big and carved into the tower stones, the hole was used by the population of the city to access the so-called albácar. Such great space—around 50,000 square meters—is placed next to the Archbishop’s Palace, between the fourteenth tower is situated and the entre la muralla donde se encuentra la torre número catorce y la walls defending the city from possible threatens.

We should not forget that the walled enclosure was a very effective defense—on one hand, during a long time against Arabs coming from Toledo, and on the other, in the time of the battles between Archbishop Carrillo and the Catholic Queen, Isabella I of Castile, and her husband Ferdinand of Aragon, in the fifteenth century. The albácar was allocated to safely shelter population in case of an attack.

The fourteenth tower —built during fourteenth century by the archbishop Pedro Tenorio, to who the turret is also indebted—is placed on the corner of the Archbishop’s Palace. Along with the rest of the walls, the tower undertook a complete process of restoring, giving it back its original mediaeval state, since 2005 to 2010, when it was re-opened to the public, as well as the Antiquarium.

The Antiquarium is an outdoors museum placed in the inside of the walled enclosure and accessible through the fourteenth tower, in which several treasures are exposed. Remains of important parts of the Archbishop’s Palace, previously destroyed in the fire collapsing the building during the Civil War, are kept as treasures in the museum.

The fire accidentally happened in August 1939; when the building was being used as headquarter for tanks and gun room. Most part of the palace was destroyed, loosing then a huge quantity of documents from the General Kingdom Archives, whose central office was situated in the palace since 1858. The collapsed walled that remained standing was knocked down in 1945, and architectonical jewels remains held in its interior were stored in several emplacement of the council.

The construction remains recovered in the present are both decorative and artistic. After a careful documentation process, all data has been ordered and exposed to the visitors so a detailed and global vision of what it was the Archbishop’s Palace in its height period can be observed.

Thus, a great number of ordered pieces corresponding to their original emplacements can be seen. Those pieces mainly belong to Ave María gallery—Plateresque style—and Aleluya gallery, followed by the Parade Ground and the Ochavo, and the octagonal tower next to the disappeared Salón de Concilios. Finally, here there are the remains of Fonseca backyard and the famous Covarrubias Honor Stair ( see a picture).

Among the fragments that several gargoyles, capitals and balustrades can be seen, so even though it represents just a minimum part of the old Archbishop’s Palace magnificence, with buildings double in size compared with today’s, a small sample of what it was this part of Complutensian history.

A Walk by the Battlements

Besides, during the visits organized by the City Council, you can take a tour by the battlements, or a walk surrounding the walls, by the upper part of the turrets and their streets, linking every turret with the next, so you will enjoy wonderful eyesight of the historical center of the city. From there, there can also be seen the area around albácar, Puerta de Madrid and today’s Via Complutense—before national railway from Madrid to Barcelona, crossing the city.