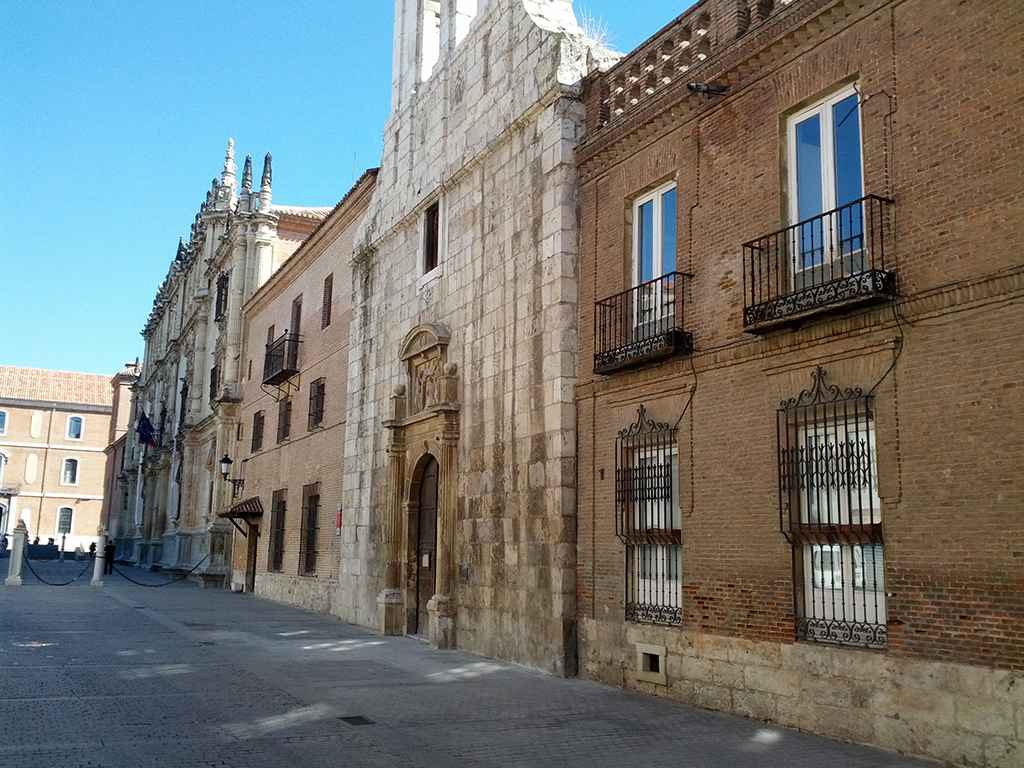 San Ildefonso Chapel has gone through so many ups and down, the same as University since sixteenth century. The chapel holds the monumental sepulcher of its founder, Cisneros Cardinal, but also that of many other illustrious personalities.

San Ildefonso Chapel was built up as a University church, specifically for the university Hall of Residence, named also after the saint.

Built between 1500 and 1520 by Pedro de Villaroel, it is based on a design by Pedro Gumiel, architect of the University. Behind its simple façade, a completely restored interior of great attractive and beauty is hidden.

The Empty Sepulcher of Cisneros Cardinal

San Ildefonso Chapel is composed of a single nave. Inside the chapel, it stands out above everything else, the impressive sepulcher of Cisneros Cardinal. The sepulcher has an sculpture of his recumbent figure constituting a mausoleum of Carrara marble—one of the maximum exponents of Renaissance funerary art. The mausoleum was surrounded by a beautiful grille whose only remains have been kept into the Museo Arqueológico Nacional [National Archaeological Museum], in Madrid. Cisneros coat of arms though, still decorating the Magisterial Cathedral in which it has been placed.

Curiosity
The sepulcher is empty, so the story says, as remains of Cineros Cardinal were removed and kept under a simple tomb inside Magisterial Cathedral.

As in many monuments of Alcalá and Spain, both the grille and the empty sepulcher tell the hazardous history of the Cardinal through centuries and his life ups and downs. San Ildefonso Chapel was built up about thirty years before the sumptuous façade of San Ildefonso Hall of Residence was done, headquarter of the university.

The aforementioned façade was at first made of bricks. However, it suffered a great damage along eighteenth and nineteenth centuries, so it was sale by auction after the ecclesiastical confiscation of religious goods in 1836.

During the Civil War, also great damages were suffered when the building was allocated so troops could use it as barracks. That was also the case of Magisterial Cathedral, where the sepulcher, the grill around it, and the Cardinal remains have being carried to after the selling of the Chapel. In 1937, everything was moved to the Museo Arqueológico Nacional, but the sepulcher—not the remains—were transferred again to the University—which had become Instituto Nacional de Administración Pública [National Institute of Public Adminisration]—after the war, more than twenty years later. The remains though were kept by the Bishopry of Madrid and did not come back to Alcalá until 1977, to the Magisterial, where they still buried.

San Ildefonso Chapel was bought by the Earl of Quinto after the ecclesiastical confiscation in the middle of nineteenth century. This Earl was the author of a real sacking in Alcalá de Henares, as he took every kind of artistic and architectonical objects he considered convenient.

The Chapel façade stands out due to its austerity, but mainly because of the belfry on its top, where the three holes initially made for bells have become stork nests. Currently, such looking has turned to be one of the most typical pictures of the city.

The bells made to be placed in such holes under the belfry were made with bronze cannons acquired by Cisneros Cardinal after winning the Battle of Orán, in 1509, and the Earl of Quinto was forced to come back to his lands in Aragón. Nowadays, you can find one bell in a Escolapios de Caspe college, in Zaragoza, and the other spread over several towns.

Such sacking and others made by the Earl leaded to the foundation of Condueños Society, a group of neighbors of Alcalá who combined their forces and economic resources to buy San Ildefonso Chapelamong other buildings. All inhabitants in Alcalá should be forever grateful for their gesture, so thanks to them, lots of those buildings have reached our days.

San Ildefonso Chapel has recently overcome a new restoration. If you visit the place, besides cardinal sepulcher, you could admire its wonderful interior: from the wooden coffered ceiling of the roof to the plasterwork or reliefs on its white walls, from every appealing filigree to the stained glass and mural paintings unknown until that moment. The so-called Cisnerian style is noticed all over it, combining Mudéjar, Renaissance and late Gothic.

One of the paintings of the Chapel is “La imposición de la casulla a San Ildefonso” [Laying on of Chasuble to Saint Ildefonso] by Juan de Borgoña, which was once property of the American magnate Algur Meadows, who donated it to the University of Dallas in 1962.

San Ildefonso Chapel counted with eight minor chapels in two different wings, in which numerous and prestigious personalities related to the University were buried—as its own architect, Pedro Gumiel, the grammarian Antonio de Nebrija, and many other, such as the doctor Philip II or Francisco Vallés, so-called “The Divine”, whose remains have been precisely founded in this last restoring, inside a lead urn hidden into the walls.

After the aforementioned restoration, it stands out the allocation of the backyard placed between the Chapel and the University, Patio de las Lenguas—where a seventeenth century cloister and its foundations have been founded today—, much less known than the other three compounding the axe of University Hall of Residence.

It is accessible from the first university yard—Santo Tomás de Villanueva—, from a door placed at the right wing, and from the very same Chapel. A small and quiet backyard with harmonic proportions, a treasure to discover!