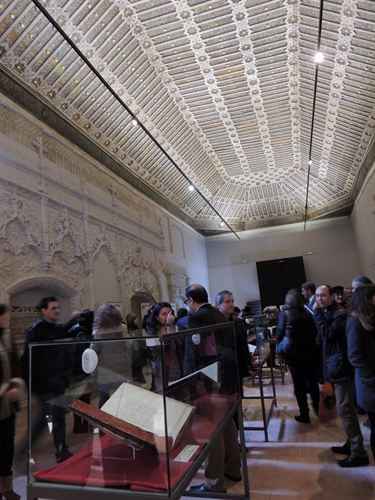 The San Ildefonso Chapel reopens to the public after the intense process of restoration process which has been subjected to. Discover its new look with the exhibition  “Homage to the Complutense Polyglot Bible. Cisneros’ Dream”.

Javier Bello, Mayor of Alcalá and Fernando Galván, the rector of the University of Alcalá, yesterday inaugurated the exhibition “Homage to the Complutense Polyglot Bible. Cisneros’ Dream” with which reopens the Chapel of San Ildefonso  after the extensive restoration process to which it has been subjected to.

Among the attractions of the sample, in addition to checking the extraordinary result of the rehabilitation of the Chapel, you can see several copies of the Polyglot Bible. “Different panels include information, accessible to all visitors, based on rigorous historical research on the figure of Cardinal Cisneros and his time”, explained Dolores Cabañas, exhibition curator, director of the International Center for Cisneros Historical Studies, and Councillor of Culture.

The exhibition will be open in the Chapel of San Ildefonso (Plaza de San Diego) until December 10, from Monday to Friday, from 10 am to 2 pm and from 4 to 8 pm.

The Alcalá de Henares exhibition unites two of the treasures of the history of Alcalá and Spain: the Chapel of San Ildefonso and the Polyglot Bible (whose Fifth Centenary will be held next year), symbolizing the extraordinary and universal project that led Cisneros firm, whose privileged mind designed a city and a university model – the “first university city model of the modern age”- exported later to Europe and especially to America.