Though Tuna is totally unknown for you, you may have crossed sometime in Alcalá someone wearing baggy trousers, a clock and a guitar. If you asked yourself in that moment why he was dress up in this way and where he was headed to, the answer is that he was a tuno, it means, a member of the Tuna. But, what is it a Tuna?

Tuna of Alcalá is a brotherhood made up by university students who dress up with old clothes and sing folklore songs—normally string instruments, such as guitars, bandurria and lutes, though they have also commonly tambourines and castanets.

It is not know for truth where this tradition comes from, but it is believed that it may be originated by the custom of some mediaeval students of using their musical ability in order to pay their studies, a phenomenon expanded to all Europe.

In any case, Tuna of Alcalá ceased being related with studying payments long time ago to be considered as a leisure activity performed by some students attracted to music and with knowledge about it.

Though traditionally Tuna was a men activity, today it is carried out by both women and men. Anyway, Tunas are commonly made up by males, probably because one of its more typical duties has always been singing serenatas to women. In fact, the term “tuna” comes probably from the Spanish word “tunante”, which means “scoundrel”.

Tuna—a tradition originated in Spain—has long influenced Latin American countries up to the point that some of them have created their own custom, such as Portugal and Mexico. Even some countries apart from Latin American culture, such as United Kingdom, join such tradition. However, Tuna is not as successful in the present as it was tens ago, surely because most young people today are not so interested on folklore.

Despite some Spanish universities have not Tuna anymore; Tuna is an alive tradition through almost all Spanish territory, above all in Madrid, Castilla y León and Andalucía.

The original musical repertoire of Tuna was made up mainly by mediaeval compositions. However, as time went by, it was gradually enriched by different popular tracks, since paso doble to jota or love songs.

The most representative song of Tuna is Clavelitos [Small Carnations], a song whose lyrics were composed by the Spanish Genaro Monreal, and music by Federico Galindo, in 1949.

Though Tuna repertoire is nourished in most part by popular and folklore Spanish music, Tunas have always travelled a lot and it is not weird to listen them playing songs from different countries. It is difficult to find a Spanish Tuna without a song so-called Cielito lindo or El Palmero, as an example, from Mexican popular folklore songs. 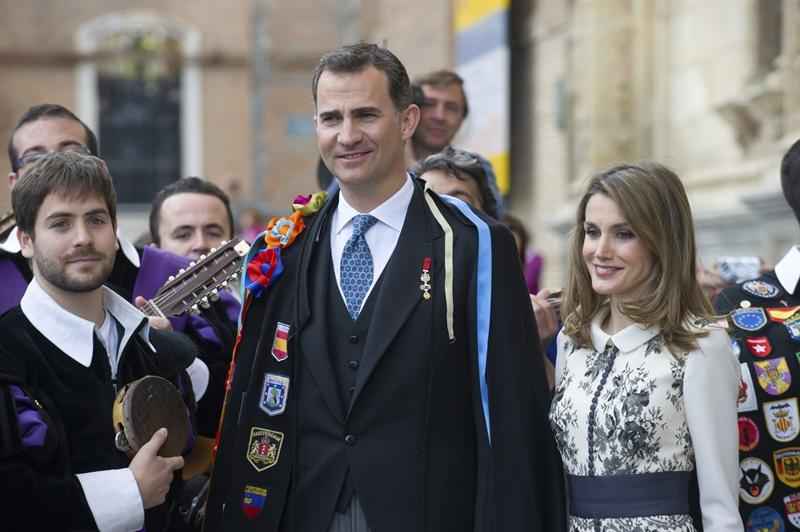 There has always been a Tuna in the University of Alcalá de Henares. Although it was not a group at first—individual students used to play alone in the streets of the city to pay their studies—, as the time went by, students gradually made groups to play in events and sing rondas.

Tuna of Alcalá is one of the most historically relevant of Spain, and among its members, there have been personalities such as the writer Francisco de Quevedo.

Nowadays, students from all faculties of the University of Alcalá are members of Tune and use to participate in all official acts related with the institution, among which the most famous is Cervantes Prize for Literature.