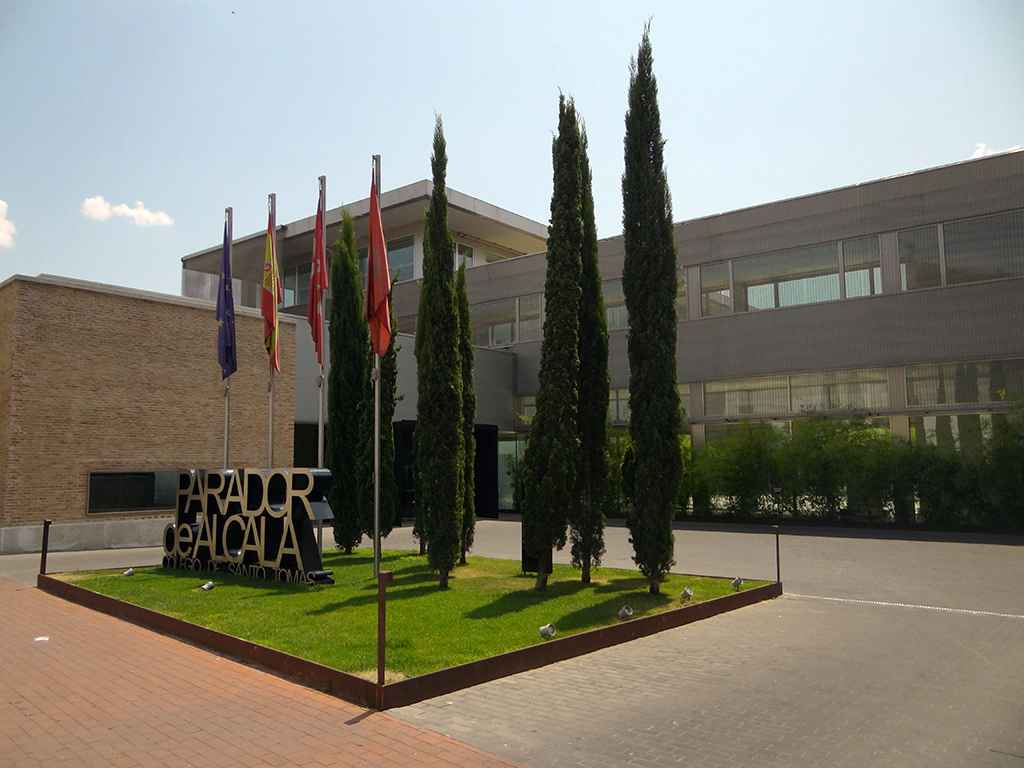 The stunning Parador de Turismo of Alcalá de Henares is the old Tomas de Aquino’s or Angels’ school. Discover the secrets of this building.

The Parador of Alcalá was opened at the end of 2008 on calle Colegios, in front of Hostería del Estudiante and of an access to plaza de Cervantes. It occupies the complete convent-school of Santo Tomás Dominicans—previously named los Ángeles and after renamed Aquino —and the lands of the old adjacent schools of Mercedarian and Manriques’ knights—which was demolished or in ruins by nineteenth century.

The complex is immense and covers a total of 30,000 square meters. Today’s whole includes new buildings totally integrated with the old ones through harmonious shapes. Such unification leaded to the winning of several and important prizes, as that of intervention in historical heritage project exposed by the famous MOMA—Museum of Modern Art—of New York.

The core of the current Parador is the convent-school of Santo Tomás de Aquino Dominicans, founded in Alcalá by the dean of the Cathedral of Toledo, Carlos de Mendoza—who in 1529 bought some houses in the nowadays calle del Empecinado, now renamed Santo Tomás de los Ángeles. Later on, in 1608, the school was opened as a part of the university founded by Cisneros Cardinal, in its final emplacement in calle Colegios, in a piece of land donated by Toledo’s archbishop García de Loaysa, and acquiring the name of Santo Tomás de Aquino.

This small Residence Hall had a church and a side cloister around which monks rooms were placed. The church has two doors remaining, one to calle Colegios—on top of which you can see an image of Santo Tomás de Aquino—, and a second one leading to the corner of calle Santo Tomás de Aquino, which has been preserved as a window, as it was during the decades before the building restoring.

The whole building was constructed with sober style and materials, made of bricks with a stone baseboard, very simple and also simple in its interior. Which stands out from this classist conception was the great interior stairs, denominated imperial, linking the two floors of the school with the church sacristy. Its size and traditional location have been preserved, covered with a modern decorative style, with a lamp in its dome, the biggest in the world of its genre.

The convent-school of Santo Tomás de Aquino, as well as Merced and Manrique schools, suffered a great deterioration during War of Independence , at the beginning of nineteenth century. In the following years, the subsequent schools were turned into Artillery, Royal Guard and Chivalry headquarters. After the ecclesiastical confiscation of 1836, Santo Tomás school was also turned into headquarters of the latter, and held up to 100-150 men and 231 horses.

As a final destiny, the school became male prison since 1852, where 500 prisoners should have been guarded, but where the double number was reached. The prison worked until 1990, when it was closed due to the damages caused by a fire, falling into a decline from which it did not recover for twenty years, when the Parador was reconstructed.

The prison was famous during both the Civil War and the subsequent years, so its cells were full of notable people locked up such as Juan March, the banker, or El Lute, a famous common thief from the seventies, as well as uncountable political prisoners of Franco’s dictatorship.

In July 2009, three great restoring works and new construction—based on the church and Santo Tomás de Aquino convent-school and the additional lands from Mercedarian and Manriques knights’ schools—leaded to the opening of the new Parador de Turismo de Alcalá, the second biggest one of Spain, after that of León’s.

The new Parador takes up a total of 30,000 square meters, has 128 rooms, 1,000 square meters of convention halls and near 9,000 of gardens. There have been maintained, as dictated by rules for the protection of historical heritage, the buildings of the school that still stand, restoring them little by little from their collapse, and building up new ones allocated to luxury hotel facilities.

Architects respected the height of the wall surrounding enclosure; as new buildings have been built under walls height with an underground floor, they are not to the naked eye from the outside. However, they enjoy natural light thanks to an imaginative solution: the so-called “sculpted garden”. At the same level of the perimeter walls and adding a lower floor, architects planned a garden upon the ceiling of basement rooms.

That horizontal garden is distributed among many gardens cross-shaped caved in the land with trees and plants, so rooms have plenty of light, and the greenness and fresh of an interior garden with all privacy guests can wish.

New parts merge with the old ones harmoniously, so the glass and steel of the former and the rock and bricks of the latter have the same straight line style, simple and sober, avoiding loud colors and widely using wood in zones where ones and others join.

A Spa into the Sacristy

New buildings uses have forced church naves to be allocated as library and sitting room, with an access to the cafeteria from the main door exit to calle Colegios—where there is a vaulted niche with the image of Santo Tomás upon it—or the old sacristy and penitentiary desks—of what it was a prison for a year—to be turned into a spa or thermal care stay.

In the same way, many rooms were old prison cells, unrecognizable now with their luxurious look, and current convention and congress halls were placed where workshops of the prison used to be.