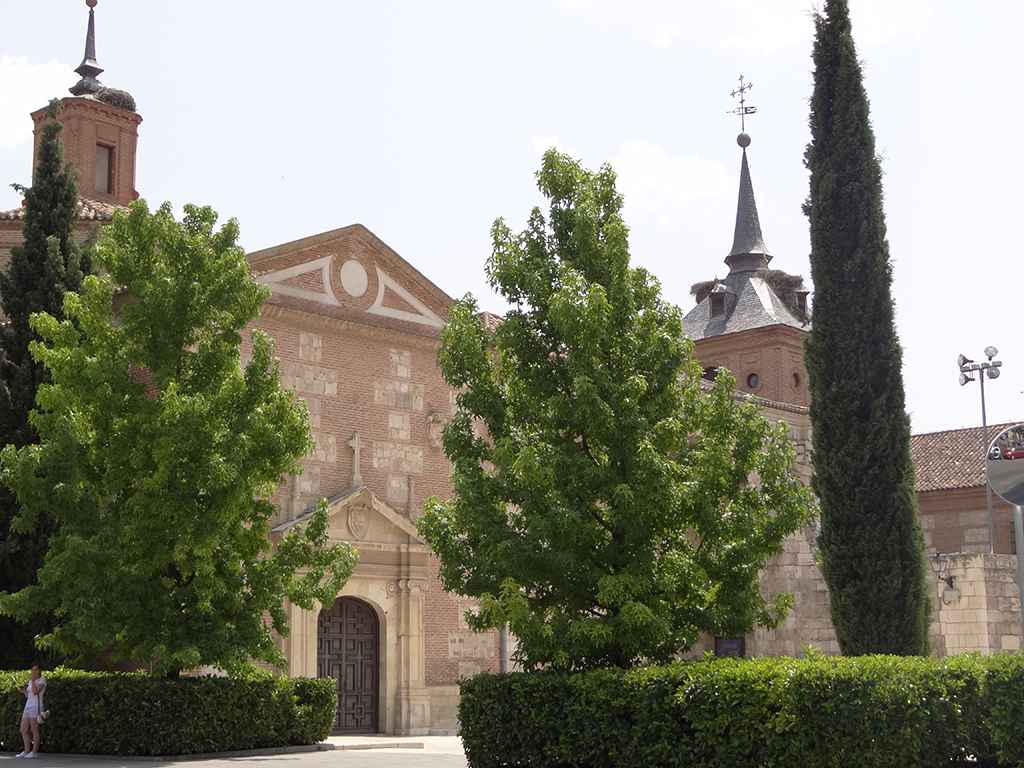 Oidor Chapel is the place that holds the font in which Miguel de Cervantes was baptized in the Catholic Faith, on October 9, 1547. The original baptismal certificate that gives evidence is still preserved and showed every year in his baptism date.

The Oidor Chapel holds, beside the font, the interpretation center “Los Universos de Cervantes”. The center is fully devoted to the writer’s figure and offers endless expositions about the world created by him. The building comprises the Antezana and Cristo de la Luz chapels, as well as the Oidor Chapel.

The Oidor Chapel is the oldest remaining of former Santa María La Mayor church (see picture)—situated today at calle Libreros. This church, that underwent numerous changes, was initially laid down upon a thirteenth century shrine called San Juan de Letrán or de los Caballeros, one of the oldest of Alcalá, where city nobility used to be buried.

The chapel was named upon don Pedro Díaz de Toledo—Oidor or Judge of the King John II of Castile—who decided to build up the property in the beginning of the fifteenth century in order to hold in it, as a pantheon, his remains and those of his family. The Oidor was a judge who heard both parts of a dispute in behalf of the king and, as the time went by, he turned to play not just a juridical role but also a high relevant political actor.

In 1453, the archbishop Carrillo promoted the foundation of Santa María de Jesús Convent. For that purpose, he chose the emplacement of Santa María la Mayor church and so, the building was moved where San Juan shrine and the Oidor Chapel were constructed, merging the buildings and forming a compound of three naves with semicircular apses and a tower.

A century after, the enclosure was renovated by the architect of the university façade, Rodrigo Gil de Hontañón, with the intention of building a big temple; at the end, though, only two sections of the nave were constructed.

Later, in the seventeenth century, the Cristo de la Luz chapel, the tower and the sacristy compounded the whole at the back.

After several restorations, at the beginning of the Civil War, the church was set fire and bombed, so it was mostly destroyed. Its remains were used to reconstruct other buildings, and just the chapels and the isolated tower remained, available to be visited.

Recently, in 1982, a complete restoration was undertaken and the whole turned into the most important exposition hall in the city. The interpretation center “Los universos de Cervantes” was created in 2005, the year of the fourth century of Don Quixote’s publication. The center holds expositions about the author, both temporary and permanent, and as time passed, several expansions have been provided, resulting in more space within the building.

A magnificent sixteenth century grille and an arch decorated with Mudéjar plasterwork—an authentic historical jewel—lead the way into the Oidor Chapel. Inside the building, the font in which Miguel de Cervantes was baptized is showed. This is not the genuine font but a reconstruction from several original fragments recovered, and if you look carefully when turning around the font, you can notice the original pieces.

Another curiosity concerning the several reconstruction undertaken in the Oidor Chapel: the original place of the font was the base of Santa María tower, situated outside the chapel and that it is possible to visit. The font was moved to its actual emplacement in the 1905 restoration undertaken due to the third centenary of Don Quixote.

Reproductions of Cervantes’ siblings baptism certificates are still hold in the Oidor Chapel as well as several objects and documents given by individuals collectors of the city, such as a Don Quixote manuscript performed by Alcalá’s school students on the occasion of the novel’s fourth centenary in 2005.