Dream AlcaláNewsMaundy Thursday: two Processions Meet in Front of the University of Alcalá 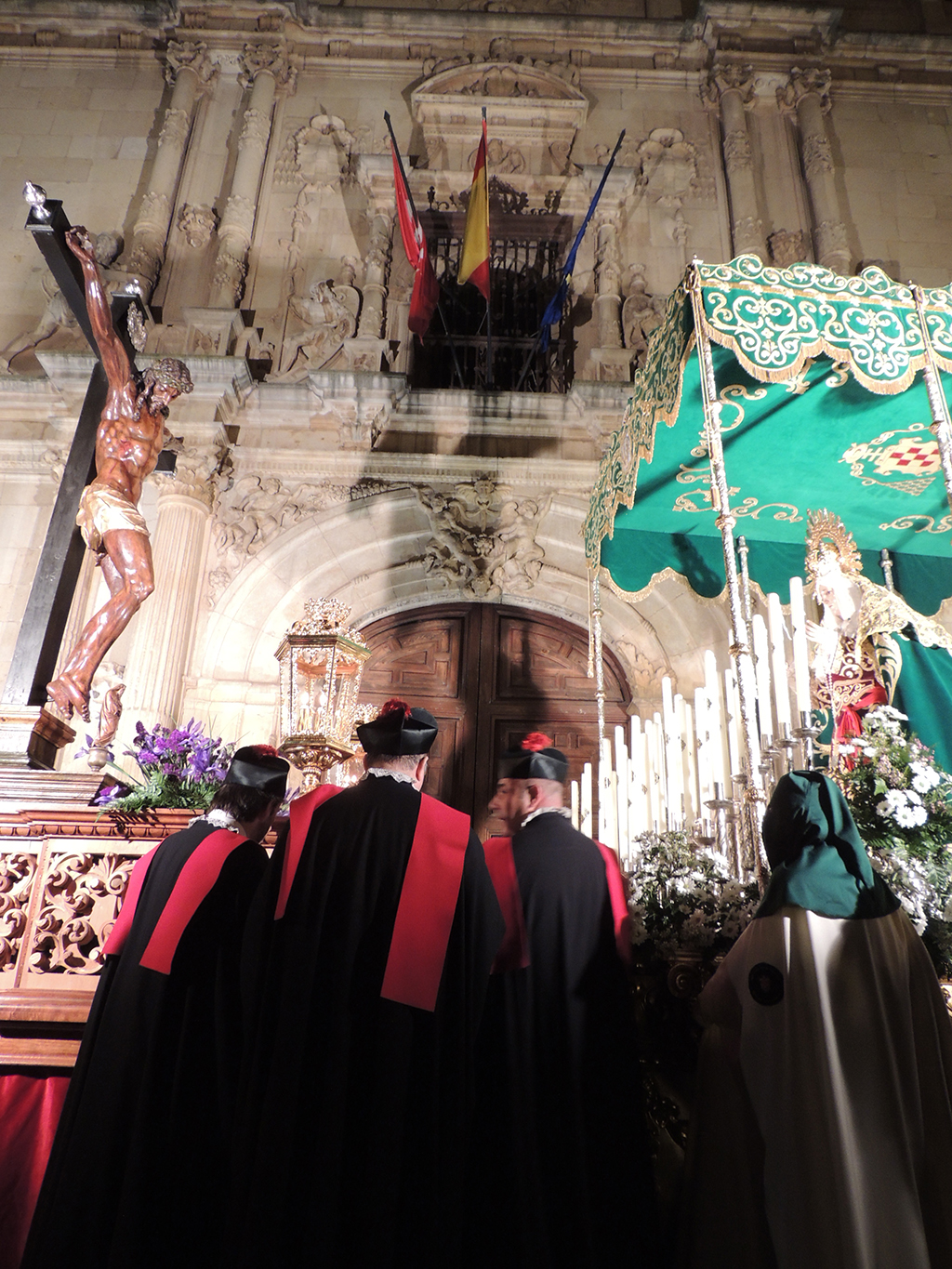 Maundy Thursday: two Processions Meet in Front of the University of Alcalá

Enter fully into the most intense phase of Holy Week in Alcalá de Henares. Discover the events planned for this day:

Events organized by the different brotherhoods

Meeting between the Saint Christ of University Teachers and its mother, the Virgin of Hope.

Visit and worship of the Most Holy in the Monument.

Starting: Old College of “San Ciriaco y Santa Paula” (commoners from Málaga).  The name is due to its founder, Juan Alonso de Moscoso, who was bishop of such city among others. Founded in 1610, its works can be considered as Madrid’s Baroque-style. Its façade is composed by baseboards and two floors divided by the stone impost of the arches. The central body is placed between two turrets of Herrerian style with stone ashlars on the angles on the two first floors and bricks ones on the upper ones. On the third floor, balconies can be appreciated with a triangulate pediment. The coat of arms of Bishop Moscoso is engraved in it, as well as on the corners of the University.

Historical reference: The brotherhood was founded in 1955 due to their devotion for the Image from Medinaceli. It was the first brotherhood of Alcalá which had its own music band. During almost half century, its canonical venue has been the Cistercian Monastery of S. Bernardo. Currently, its canonical venue is placed in the Parish of San Bartolomé. This brotherhood is the one with the largest number of penitents, around 1.600 slaves. In the commemorative acts of its fifty anniversaries, the Silver Medal of the City was awarded to it.

Float: The Image of “N. P. Jesús Nazareno de Medinaceli” and its throne are works by the maker of religious images Emilio Tudanca while the Image of “María Stma. de la Trinidad” and its throne were made by his son Javier Tudanca. The long poles of the canopy of the Virgin were golden, being one of the few of such characteristic in Spain.

Canonical Venue: Chapel of Doctrinos. Building constructed in the sixteenth century from the previous building dating from the thirteenth one. This is a building made by brick and rough stones load-bearing walls, following the style of the so-called “sizing from Toledo”—typical from Madrid’s Baroque style. The building is composed by double cells, one of them holding the church—whose base floor is an open nave covered by a fake vault supported by a decorated cornice—and the other homing the sacristy. The transept is separated from the nave by a grill of two leaves, compound by twenty iron bars installed in December in 1721.

Historical Reference: The permission to put in place the brotherhood dates back from September 1st1660. The First Ordinances or Constitutions were written in twelve chapters and were approved by the Council of Government of the Archbishopric of Toledo on March 6th 1661. In 1665, the Pope Alexander VII pointed the feast of the Ascension as the day in which the brotherhood of “Santísimo Cristo de los Doctrinos” would be able to celebrate its procession, awarding Plenary Indulgences to those who visit the sanctuary during the festivities of Holy Cross Day, Nativity of Mary, Feast of the Ascension and Good Friday. In 1945, the image of “Nuestra Señora de la Esperanza” is embodied in the brotherhood.

Float: Wood carving of the “Stmo. Cristo Universitario de los Doctrinos”: a Jesuit work by Domingo Beltrán between 1587 and 1590. Sculpted in sateen wood. The hair and the crown of thorns are made of ebony, showing the torture of death and the love in its majesty. The image of “Nuestra Sra. de la Esperanza” carved in wood by the maker of religious images Justo Garrido, from Madrid, was included in the brotherhood in 1945. It goes out in procession on a canopy float with a green gown and golden needlework.

Clothing: Habit from the “Stmo. Cristo Universitario de los Doctrinos”, it means, a black executioner with a white gullet and lace edging, as well as the red colored hood with the coat of arms of Cardinal Cisneros typical from the students of the Golden Age. They also wear a mortarboard topped off with a red pompom and white gloves and the medal of the brotherhood. The procession is made barefaced. In the case of the Image of “Nuestra Señora de la Esperanza”, brothers wear a bone-white habit, pleated on the front and figure-hugging thanks to a cincture—a rope of green and golden pompoms. Same color as the habit, the clock is finished off by an olive-green Hood and whose back wears Cardinal Cisneros coat of arms, and white gloves. Medal of the brotherhood.