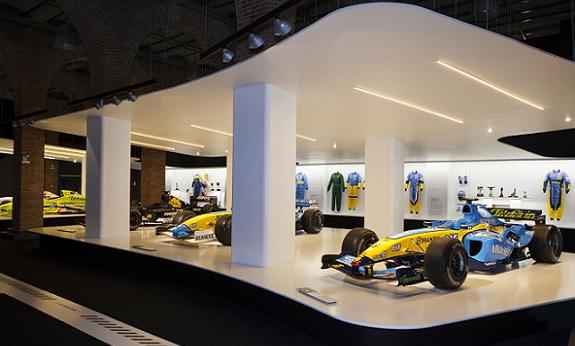 Worldwide Formula 1 fans  will meet in Madrid the best of Fernando Alonso and Formula 1.

Fernando Alonso Collection is the most ambitious show that has ever been held about a Formula One driver. More than two hundred seventy objects make up this collection, of which the highlights include Formula One single-seaters, formula feeders and many of the karts which the Asturian racing driver has driven in his sporting career.

This extraordinary private collection is complemented by audiovisual presentations, interactive spaces and parallel activities that offer a complete perspective on Formula One racing and that help you get to know Fernando Alonso, one of the most important Spanish athletes in history.

Fernando Alonso climbed into his first single-seater when he was just three years old. His father built him a kart and they had to adapt the pedals so that the kid could drive it. Years later the Asturian went on to become the first ever Spaniard to win a Grand Prix, the driver that has notched up more points than anyone else in history, and a two-times Formula 1 World Champion. A sporting legend whose values of hard work, humility and passion have helped him win a host of international admirers both inside and outside the circuit. Canal de Isabel II Gestión and the Fundación Fernando Alonso have decided to organise a unique, world-class exhibition to honour the true dimension of this leading figure in Spanish sport.

For the first time ever, all the cars the Asturian driver has ever raced will be brought together under one roof, from that first kart that he began with as a child, to one of his latest Ferraris. The spectacular exhibition of single-seater racing cars is complemented by other objects such as helmets, racing suits and boots.

Pride of place will also be given to his collection of trophies, among which special mention should be made of the one he earned in his first ever race in Ribadesella in 1984, the 2005 and 2006 World Championships, his two World sub-championships in 2010 and 2012, his third-place trophy from 2007, the 2005 Prince of Asturias Prize, the 2006 Spanish Olympic Committee medal, and the 2011 Community of Madrid prize, among others.

A selection of more than 270 objects that serve to communicate quite perfectly the key moments of a unique career.

Interactive installations, large-format audio-visuals and parallel activities highlight the importance of Spain’s best-ever driver, and also that of Formula 1 itself, a spectacle brimming with excitement.