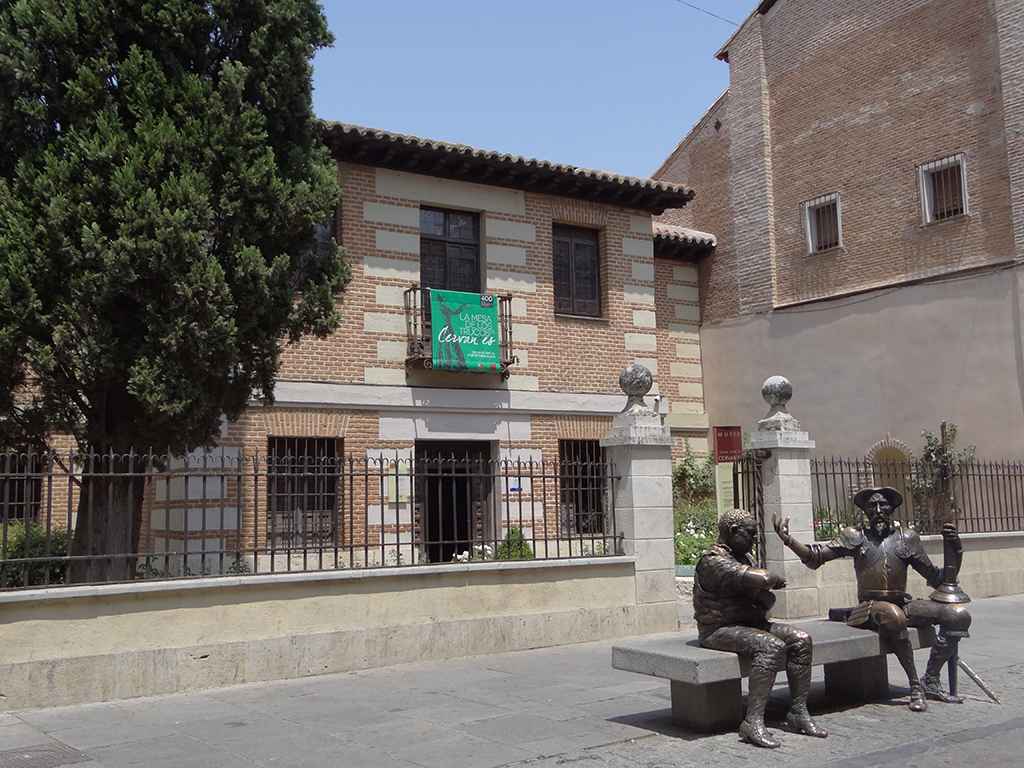 The house where the great Spanish novelist, poet and playwright Miguel de Cervantes was born has been turned into a museum. There, you can see how people’s day-to-day life was at the time in which Don Quixote’s author lived. There are also more than 200 different editions of the worldwide famous novel, as well as exhibitions and conferences around Cervantes.

(This text comes from Cervantes Birthplace Museum, part 1) The Cervantes Birthplace Museum was built in 1956 and, over the years, the amount of visitors increased up to a total of 200.000 in the year 2005—with an annual average of 150.000 visitors. Thus, the Community of Madrid decided to undertake a number refurbishments and alterations between years 1997 and 2003. This works mainly consisted on the annexation of the two-stories neighboring land, which enabled the addition of over 200 square meters to the Cervantes Birthplace Museum; thanks to what it is possible to hold all kind of in-site exhibitions and conferences.

After those improvements, the Cervantes’ house is not just the place where the writer spent his first four years of life before moving to Valladolid with his family, but also a museum holding great quality expositions. The museum gathers too, an astonishing collection of more than 200 editions of The Quixote, translated into most of the world’s languages, and printed between the seventeenth and the twenty-first centuries. In addition, different editions of Cervantes’ complete works and a big number of bibliographies about his the figure, life and literary works are showed.

The private spheres of Cervantes’ family life took place in the upper or first floor where bedrooms and bathrooms were placed—not existing at that time facilities equipped with running water. Besides, as a museum and a Cervantes research center, the site offers the possibility of visiting the two halls where different editions of Cervantes’s works are showed, and a curious performance with figures and puppets, depicting characters from Quixote’s famous passage “maese Pedro”.

This was the head-of-the-household room, generally the father, where—in addition to the canopy bed, a great bedhead profusely decorated and trunks used to accommodate the clothes—a desk or bargueño: a piece of furniture over a table, with flip tops, full of small doors and drawers with their correspondent keys and some secret departments—used to hide some important documents, such as the title deed or similar.

Next to the Gentlemen’s rooms you can find the chambers intended for ladies, housekeepers and children. That was precisely the order in which the intern family hierarchy was structured, under the command of the father and husband. When there were maids’ servants living in the house, they were at the lowest level in the hierarchy, right below maids and housewives.
The first hall, or affection platform, was intended for the lady. There, she welcomed her husband and gave birth to her newborns. It is also the place where lady Leonor de Cortinas would take care of her baby Miguel.

The bathroom, or powder room, , is a place that mirrors the details of the most private sphere of day-to-day life of dwellers; hence, it is always a popular subject for visitors to discuss. Although regular bathing was not usual at that time—water came from a well and there were not pipes or sanitarians,—when the bath ritual took place, it was typical to cover the bathtub with clothes in order not to get dirty with the pitch varnishing the surface of the bath to make it waterproof.

Hygiene routine was essentially carried out by means of washstands (antecessors of washbasins) and scents, ointments and rubs—as well as wearing a fresh set of underwear, highest sign of cleanness. In this hall, there are placed both a chamber pot and a sofa with its correspondent hole, very aptly illustrates the customs of the period, original as everything in the house, from sixteenth or seventeenth centuries.

In that period of little literacy, especially for women, males used to start their education at the age of six years old. That was the period the siblings of Cervantes stayed in the house, period in which their slept in this room where the dueñas take care of them. As an epitome of how religion was a truly pervasive element, there is a seventeenth century bust of the Santos Niños, Justo y Pastor, patron of Alcalá, in the room.

Cervantes’ editions hall I and II

At the back of the house, there are two halls following the same gallery surrounding the garden in the upper story.  Those halls show different editions of Don Quixote and a wonderful and valuable collection of Miguel de Cervantes’ works in a great quantity of languages, published along several centuries.
Editions in Spanish and in other autonomous languages are showed in the first hall. There you can find, for instance, the first Spanish illustrated edition of Don Quixote (Madrid, 1674), the first Spanish edition published in England (London, 1738) or the first published by the Spanish Royal Academy of Language (Madrid, 1780).
In the second hall, several translated editions of Don Quixote are displayed,—such as the first English Edition of the Second Part of the book (London, 1620), the first Danish edition (Copenhague, 1776-77) and so on up to a total amount of more than 200 different editions, many of which are illustrated by great artists such as Coypel, Vanderbank, Doré, Dalí… In addition, an exposition of enlarged photographs of front pages and engravings of these copies are exhibited, making the visit to this hall even more enjoyable. Thanks to the purchase of the adjacent house and the consequent extension of the house-museum, these first floor halls offer to the visitors comfort and spaciousness, while the ground floor conference hall holds the launch of some books, as well as pedagogical workshops and an endless list of cultural activities.

The museum is being provided to make accessibility easier to blind people or persons with visual impairment among others, thanks to a collaboration agreement between ONCE (National Association of Spanish blind people) and the Community of Madrid.

On October 31 and November 1 the 29th edition of the well-know theatrical performance will be hosted in Alcalá de Henares: Don Juan Tenorio...
Leer más
17th century

The Convent of the Clarisas of San Diego is well known by the delicious  Almonds of Alcalá that are made in it. It is a unique...
Leer más
Uncategorized