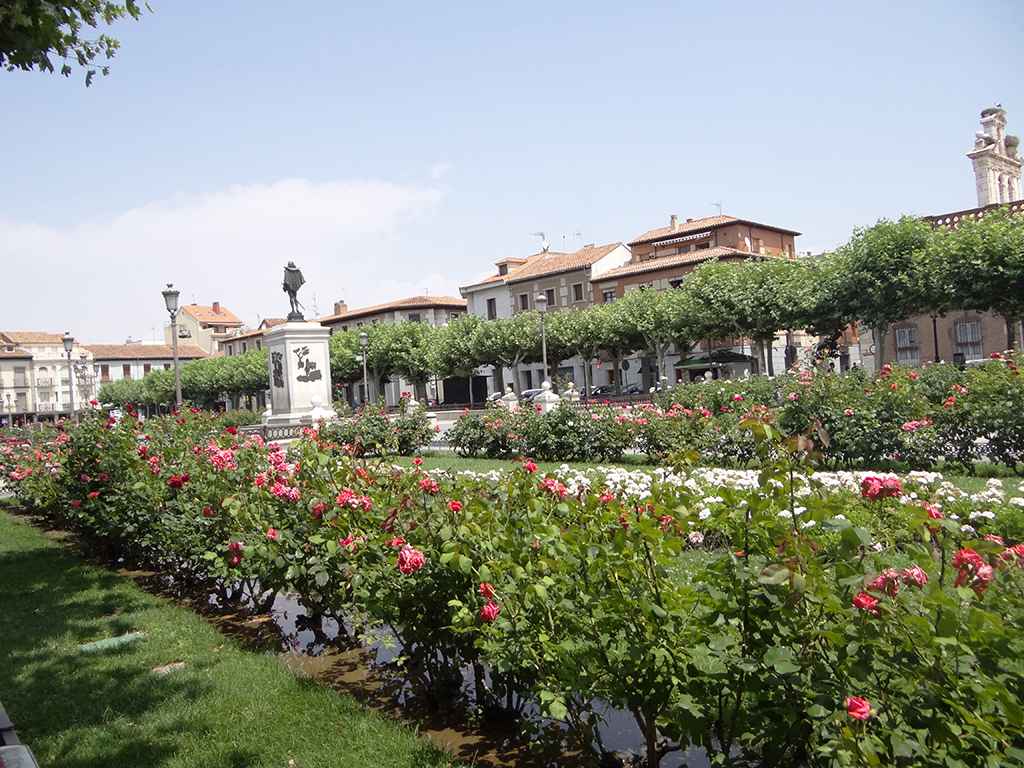 At the very heart of Alcalá de Henares’ rich historical center, Plaza de Cervantes is, for both visitors and neighbors, the city’s core and main meeting point, where they can enjoy long promenades lined with trees and the impressive, very well maintained gardens that surround Miguel de Cervantes statue.

Whenever the weather is right, Plaza de Cervantes get crowded of passers-by trying to relax and unwind, and have a nice chat, losing all sense of time, especially as the light fades. Hence, there are plenty of seats and kiosks surrounded of tables where enjoy a drink or an ice-cream.

Plaza de Cervantes dates back from thirteenth century when it hold a weekly marketplace as well as any other important event celebrated in the city, including bullfighting—until the nineteenth century. Nowadays, it still holds lots of local festivities, such as contests between different city festivity groups or peñas, dances and concerts, every year in August.

The geographical and social center of Plaza de Cervantes holds a bronze statue of Miguel de Cervantes, meeting point par excellence for city inhabitants and visitors alike.  Erected in 1879 by Carlo Nicoli and illustrated with modern bas-relief in its pedestal by José Noja, the statue represents several scenes of the masterpiece of the author born in Alcalá a few meters from Plaza de Cervantes.

Designed by the architect Martín Pastells and built up in the Lebrero’s foundry of Madrid, in 1898, a splendid music pavilion stands near that monument. Right opposite, you will find the City Hall or City Council, from where you may start a tour visiting all the surrounding buildings that confer the square the historical and social dimension that characterizes the always throbbing heart of Alcalá.

Curiosity
During the Golden Age, the Casas del Concejo were situated in the square and nowadays, the oldest Alcalá’s coat of arms is preserved in one of its columns.

In Plaza de Cervantes, the current City Council, head office of local powers, was in the old days the Convento the Agonizantes. Nevertheless, many councillorships or local government delegations have their head in buildings throughout all Alcalá.

The building was turned into City Council in the nineteenth century.  In the first floor, or noble, the Salón de Plenos—dating back from the same nineteenth century—and the Junta del Gobierno hall stand up. The latter room, houses the Cervantes’ baptismal certificate and the Complutensian Polyglot Bible busted by Cardinal Cisneros in the fifteenth century.

One of the two city’s greatest theaters, the Corral de Comedias has previously been used both as a romantic theatre and as a cinema. Yet, as restorations were undertaken, it emerged what is considered today as the oldest theatre of Europe still functioning—since it was thought up in 1601 by the carpenter Francisco Sánchez. It was built upon the scheme of a classical comedy theatre with balcony, stands and gods—the space addressed to women who was separated from men.

Going from the square to calle Colegios—where precisely several university colleges are placed—you will run into what it seems a church, with a small square in front of and next to an impressive solitary tower. This is the old church of Santa María la Mayor, set fire during the Civil War, from which it just remains the Oidor and Antezana chapels, and its tower. You can also see, in Oidor Chapel, the font where Miguel de Cervantes was baptized on 9 of October of 1547.

The tower restoration was finished in 2009, and then, it is now possible to go up the 109 steps of the spiral staircase and obtain one of the best views of both the Plaza de Cervantes, and the hole city. A place which certainly deserves the visit.

Next to the Oidor Chapel, the Municipal Tourism Office and the Círculo de Contribuyentes building with its great access staircase are founded. This building belongs to the Condueños Society, founded by a group of Alcalá citizens in 1851, with a totally unselfish and filantropic aim: saving the University buildings that were going to be auctioned and take out of the city stone by stone. They contributed with 80.000 reales (old Spanish currency) and achieve the buildings to stay safe and sound until today. Nowadays, the Círculo de Contribuyentes holds the restaurant El Casino,—one of the most well-known of Alcalá de Henares—,where you can enjoy a good traditional and vanguard, high quality food.

The Plaza de Cervantes is one of my favorite places in Alcalá. During the summer, the Plaza is especially gorgeous. There are flowers blooming everywhere, and cool benches shaded by leafy trees where you can sit and escape from the summer heat for a bit. Adorable little old men and women sit or walk around the plaza enjoying the fresh air, and I often saw families with children strolling through the plaza as well. It is a wonderful place to simply relax and observe the Spanish people and culture.

Because of its central location, the Plaza de Cervantes is also a great place to meet up with friends. The giant statue of Cervantes in the center of the plaza can’t be missed and serves as an excellent starting point for most Alcalá excursions. From the plaza, you can easily walk to the calle Mayor to enjoy some shopping or head out to the bars. It is also close to the University of Alcalá and the Convent of the Clarisas of San Diego. In addition, the Plaza is just as lively at night as it is during the day. Something is always going on!

In short, la Plaza de Cervantes is a must-see spot in Alcalá. Always clean and beautiful, it’s perfect for taking some outdoor photos, meeting up with friends, or relaxing on a summer day.