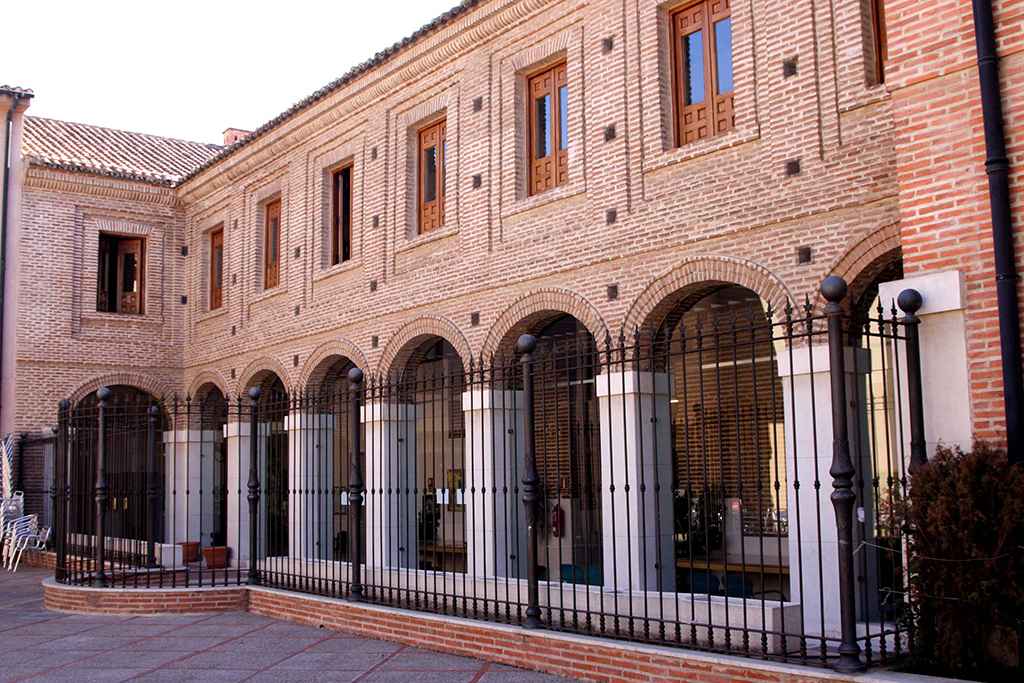 Colegio de los Irlandeses is a wonderful example of the cosmopolitanism and relevance acquired by Alcalá de Henares with the opening of its university, especially among European Catholic countries.

The college—architectonical jewel of the square with the same name—undertook an important restoration in the 1990s. A beautiful enclave in the middle of the center—between calle Escritorios and calle Mayor—with two accesses to the college, one of them to corral de la Sinagoga.

San Patricio, San Jorje or los Irlandeses junior college—the three numbers it has or has had—was founded in 1630 by the priests Sean O’Neill and Teobaldo Estapletonio—clearly a Spanish adaptation of Stapleton—and closed in 1641, as the death of their founders leave the school with no money to support it.

For Students from Protestant Countries

It was re-launched little after thanks to the express desires of the Portuguese baron don Jorge de Paz Silveira, jailer of the fortress of Martos in Jaén, knight of Santiago and Cristo’s orders with lands and goods in Cuenca, who ruled as such in his testament. Once he deceased in 1645, his widow, Beatriz de Silveira, continued carrying out the project, choosing Alcalá for this purpose.

The college, founded in 1649 thanks to a found of 5000 ducats counted with twenty students and was dedicated San Jorge. The college did not take up its current land until several years after, when it was completely built up, before its definite emplacement in calle Colegios, afterwards known as Basilios’ college.

The aim of the school was to be a university seminar-school for Theology education of Irish, Flemmish and Dutch students, following the practice carried out in several Catholic universities of holding Protestant-country students under its influence—with the requirement of coming back to their countries after their studies to spread the Catholic faith in their native countries.

Remember that Ireland belonged to United Kingdom, where Anglicanism was already the official religion. Thus Irish, traditionally Catholics, suffered religious prosecutions in the sixteenth and seventeenth centuries, being banned, even, to study their religion.

At the same period in Spain, another Irish college was founded at university of Salamanca, as there was also hostelry in Madrid and other similar colleges, for English and Scottish.

During long decades, the college got to be notable in Ireland, as several of the students reached the bishopric of their countries’ dioceses. However, as time went by, it started to pass through distressed circumstances, as incomings came from annuities—something similar to the current public debt—and inflation destroyed the interests.

Finally, the college was integrated with the Patronato Real by Charles III, but as he expelled Jewish from Spain, he combined Alcalá’s college with the Scottish one in Madrid, Spain, in 1768. A little afterwards, in 1785, such union was undid and the two Spanish Irish colleges were united, establishing the new college in Salamanca core.

The school was closed because of not being in good shape. A cornice was about to fall and the church belonging to the college demolished, so in 1795 it was auctioned and bought by Güemes earl, who turned it into a luxurious small palace for his and his family. Afterwards, it was property of Revillagigedo earl.

The category given by their new owners was such that in a visit made by King Philip VII in 1818 to Alcalá, he slept in there—the Archbishop’s Palace was not available anymore, royal residence when they visited the city. Commemorating such visit, since that date and during seventeen years, there was a decorated chain on top of the façade, hooked by nails that today continue in there.

Later on, as the time went by, in the twentieth century, it became humble condominiums, and little by little fell into disrepair, so in 1960s it lost the two side naves it had and even suffered some collapse while they did propping-up works in the eighties.

Finally, the building was saved and completely restored in the middle of the nineties, thanks to the intervention of Fundación Colegio de los Irlandeses, created by the University of Alcalá and Ireland embassy. It was later added to these organisms the group Jefferson Smurfit, so the current college is a training and exchange center between students of different nationalities, Alcalingua, dedicated to the teaching of Spanish as a second language and Spanish teachers training.

The college and Alcalingua are framed in the University of Alcalá. Though today the building is completely restored, but it keeps its traditional Barroque design, the façade of seven balconies and windows decorated with triangle pediments, the stone door on its upper part—result of the restoring made by 1676—and the cloister closed by a grille leading to plaza de los Irlandeses. To access it from calle Escritorios façade, turn back by an alley so-called in the past alley of Peril, for being point of duels and fights.