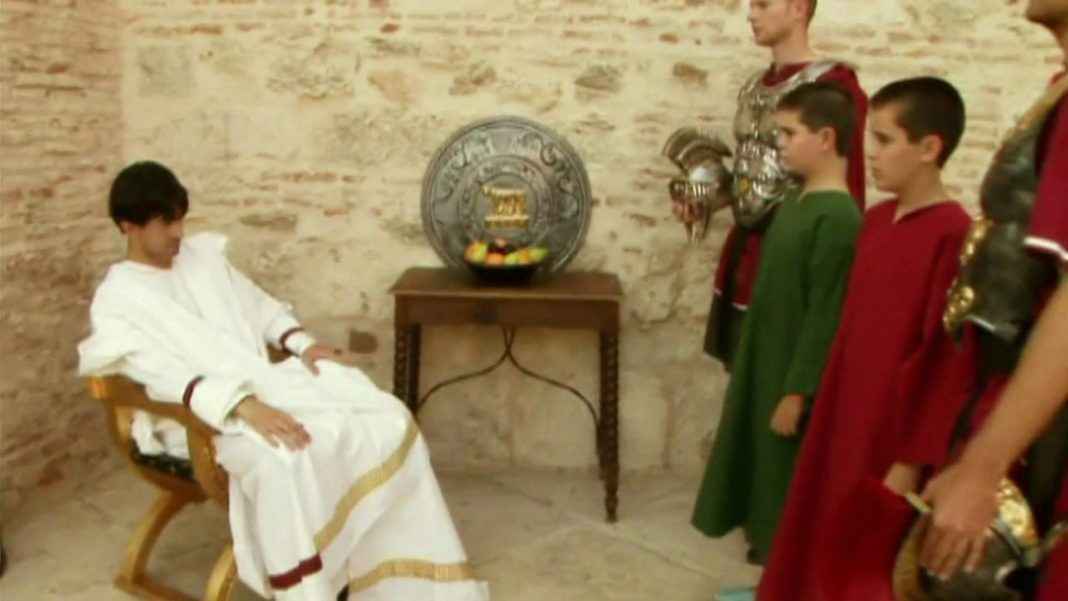 Saints Children Justo and Pastor  are Patrons of Alcalá de Henares. They were martyred in the early fourth century, under the persecution of Diocletian and Maximin.

These two children or teenager were cut the throat of by Order of the Diocletian emperor, due to their refusal of resigning their faith in Campo Laudable, in the year 305 (fourth century after Christ). Afterwards, the field held the construction of an old church that subsequently gave way to the Magisterial Cathedral that was built upon its remains. The stones where the children were tortured are kept into a Cathedral crypt.

One of the emperors’ chief persecutors of Christians in the early years of the 4th century was a man named Diocletian, who journeyed through Spain in a frenzy of violence and terror. In 304, he reached Alcalá, and proclaimed that all Christians, on pain of death, renounce their faith. Two schoolboys, Justus (age 13) and Pastor (less than 9), heard of this and determined to show that their own Christian faith was as strong as that of any of their elders by publicly reciting their catechism.

Diocletian thought it simple to cow schoolboys. He ordered that they both be savagely flogged. But although the sentence was viciously enacted, neither flinched. Instead the two boys shouted words of encouragement to each other, which only whipped their tormentors to further fury.

Diocletian was shamed by their bravery. He still wished to have them killed, but the sentence was carried out secretly. They were beheaded outside Alcalá, when no one was about, but some fellow-Christians found their bodies and buried them where they had died.

Today Saints Children Justo and Pastor are considered among the patron saints of Alcalá and Madrid. Saint Prudentius called them among the most glorious martyrs of Spain. Their alleged bodies were discovered in the 8th century and taken to Huesca. In 1568, they were brought back to Alcalá, where they lie under the high altar of the Magisterial Cathedral.

His feast is celebrated on August 6.

The following video documentary gives you the opportunity to assist the reconstruction of the events over 1700 years ago in the city of Roman Spain «Complutum», now Alcalá de Henares .